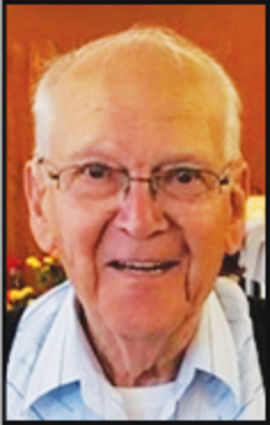 Gordon Berndt, 95, Williston, ND, passed away on Sunday, Aug. 23, 2020 in Billings, MT. A private/virtual ceremony is planned for the near future in Sidney with burial to be in Sidney Cemetery. Cremation has taken place and Fulkerson Funeral Home, Sidney, MT is caring for the family. The family is planning to have a Celebration of Life/Memorial for Gordon next summer with family and friends. Please make any memorials to your favorite charity. Remembrances, condolences and pictures may be shared with the family at http://www.fulkersons.com.

Gordon Herbert Berndt, Williston, ND, formerly of Fairview, MT, passed away peacefully on Aug. 25, 2020, in Billings, MT, after a yearlong battle with cancer. He was comforted at his passing by his son, daughter and their spouses at Sweetwater Assisted Living. St. John's Hospice was assisting with his care.

Gordon was born Nov. 13, 1924, as the 11th of 13 children to his parents Gustav and Frederika (Senechal) Berndt on their farm north of Anamoose and Drake, ND. He attended school at Round Lake School through the 8th grade.

Gordon arrived in Fairview in 1944 to visit sisters and soon found work at Thomas Service Station. He met Irene Henderson through her brothers. Gordon and Irene were married in 1945 at Irene's parent's home place west of Fairview, which they later farmed. Their three children, Dennis, Gene, and Colleen were born during this time as well as infant daughter Wanda, who died at birth. Gordon started driving a school bus route while farming, as well as the activity trips, and continued for many years. He enjoyed the many students who rode the bus during the years. Gordon and Irene were long time members of the Lonsdale Methodist Church, Sidney, MT.

The family moved to Fairview in 1961 and Gordon worked for Davidson Hardware and then started a long career with Cenex in Fairview and Sidney. He retired from Cenex in Sidney at age 81 after some 43 years. He enjoyed working with the many customers over the years and the fellow workers at both Fairview and Sidney. Gordon was an accomplished guitar player and took great pleasure playing in a local country band that performed at many venues across eastern Montana and western North Dakota. He also gave guitar lessons to local youth.

Gordon enjoyed gardening, reading, walking, feeding and talking to his local rabbits, squirrels and birds. He was always up for a good visit and laughs with friends and relatives, or sometimes strangers. Having a piece of pie, cake or any other dessert always made those visits extra special.

Irene passed away in 2010 and Gordon moved to Bethel Heritage Manor independent living in Williston. He found many new friends and always looked forward to working on puzzles, doing his walking and getting visits from friends and relatives.

Gordon's greatest joy was being with family. The visits, gatherings big or small, holiday meals and special occasions with his children, grandkids, great grandkids, brothers, sisters' and in-laws families were always very special. Gordon had a great sense of humor and loved a good joke and laugh. They were always a part of his letters and phone calls. He lived a long, good life and will be greatly missed.

The family would like to thank all of his doctors and nurses over the years, the staff at Sweetwater Assisted Living and St. Johns Hospice, and all of his friends and staff at Bethel Heritage Manor and his good friend Sally Melland, who helped with many things and provided good company.