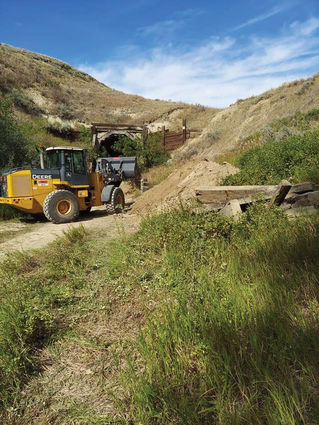 The Fairview Bridge and Cartwright Tunnel have always been a big part of the Fairview community.

Ray Trumpower,position with Fairview Chamber of Commerce and Friends of the Fairview Bridge, stated, "The Fairview Bridge and the Cartwright Tunnel are an integral part of our community. If you wander through Fairview, you will see pictures of the bridge everywhere; on the wall of City Hall there is a mural of the bridge and right out front of Loaf 'n Jug there is a metal sculpture of the bridge. It has always been a part of this community and we need to preserve it."

In an effort to preserve this rich part of the area's history, workers from the Montana Conservation Corps came out to the area and worked on the tunnel.

A few years ago, the east side of the tunnel experienced watershed, which caused damage to the tunnel's structure. "We had loose soil behind the buttress because of a severe rainstorm we had a few years ago, and the watershed came into that loose soil and broke one timber and moved another," said Trumpower.

So, therefore, the Montana Conservation Corps, a division of the AmeriCorps, came out to help control the watershed. The workers set up tents and stayed on-site during the days that they worked, Sept. 1-5. The crew dug soil out of the east end of the tunnel and applied Sakrete concrete to fix the watershed. "This crew worked their butts off! They shoveled out a lot of dirt and carried many bags of concrete to the tunnel," said Trumpower.

Trumpower explained that the dry weather this year helped with the tunnel repair. "The crew did not have to work in the mud, and we were able to get equipment a lot closer than anticipated. We thought they would have to carry bags of concrete 100 yards, but they were able to get the bags into about 100 feet, which really made a difference."

During the process of digging, the workers discovered that the watershed damage caused one timber to break and another to move. These two timbers were dug out and left on piers of dirt so that, in the spring, they will be able to be moved and replaced with a backhoe.

This is the fourth time that the Montana Conservation Corp has come out and worked on the bridge. "This company has put down the decking, handrail, fence, and benches on the bridge; they have always done a great job," added Trumpower. 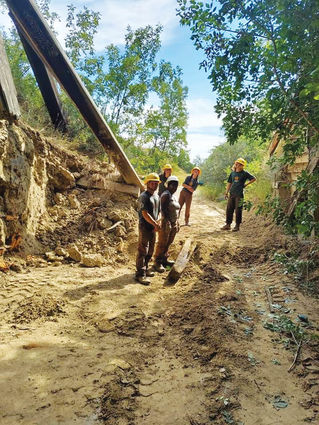 Trumpower explained that the community appreciates all the hard work that has gone into the repairs on the tunnel. "The bridge and tunnel are very important parts of the community. There are many pictures of the bridge that give you a good idea of what it looks like, but you have to actually be out there and walk across the bridge and through the tunnel to understand the scope and the scale of it."

Community members of Fairview have created a Facebook page to share old and current pictures of the Fairview Bridge and Cartwright Tunnel. "On this page, we have a lot of historical pictures that we have been able to gather over the years including pictures of when the bridge was first being built." Anyone interested in learning more about these historic structures, is encouraged to visit the "Friends of the Fairview Bridge" Facebook page.