This noxious weed has been found in additional North Dakota counties every year since 2018. 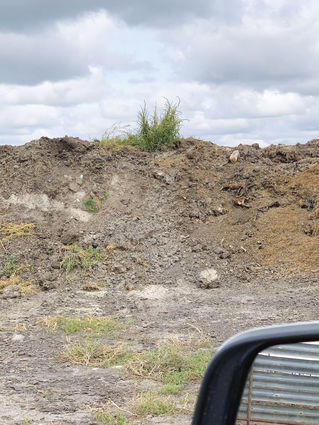 Palmer amaranth is growing out of a manure pile. (NDSU photo)

North Dakota producers need to be vigilant about keeping Palmer amaranth, a particular noxious weed, off their land, according to North Dakota State University Extension specialists.

This weed has been found in new North Dakota counties every year since 2018, and 2020 was no exception.

One source of introduction in 2020 was through contaminated grain screenings. Samples pulled from a pile of sunflower screenings detected up to 1,000 Palmer amaranth seeds per pound of screenings from one source.

In one case, screenings had been fed to cattle and Palmer amaranth was detected in fields where cattle grazed and also fields where manure was spread as fertilizer.

"This serves as a reminder that grain screenings can be a major pathway of Palmer amaranth introduction into the state, especially if the screenings originated from areas of the country where Palmer amaranth is the most abundant weed," says Joe Ikley, Extension weed specialist.

"Grain screenings are usually a price-competitive source of cattle feed, but they might contain things that you don't want at any price, such as Palmer amaranth," warns Karl Hoppe, Extension livestock systems specialist Carrington Research Extension Center (CREC).

Grain screenings consist of cracked or small pieces of grain plus foreign matter. The foreign matter can be other kinds of grain, sticks, leaves, insects, rodent feces, fungal bodies such as ergot and sclerotia, and weed seeds. Palmer amaranth has been added to the North Dakota noxious weed list.

"Grain screenings usually have some feed value for livestock and are routinely purchased without any idea of weed seed content," Hoppe notes.

"However, grain screenings can carry viable weed seeds that geminate in unusual locations," he says. "Where the screenings are unloaded can lead to the start of a weed infestation. These areas proliferate in feed yards that do not have fastidious weed control."

Extension weed scientist Brian Jenks says, "While this weed looks like a pigweed, it is resistant to many of our commonly used herbicide modes of action, it is extremely prolific in its seed production and it can spread like wildfire."

The best way to control Palmer amaranth is not having it enter your farm, the specialists say.

NDSU Extension specialists have several tips on how to manage feed and manure that may be contaminated with Palmer amaranth seed:

- Have screenings tested to determine the presence of Palmer amaranth prior to feeding the screenings to livestock. Feeding whole seeds may perpetuate the problem. Some seeds, especially tiny, hard-shelled seeds from Palmer amaranth, can escape digestion by cattle.

- Grind the screenings so fine that the seeds are destroyed. For a small-seeded plant such as Palmer amaranth, aggressive grain processing is needed, and hammer milling is usually the best. The small black seeds are about 1 millimeter in diameter.

Making sure the moisture of the compost pile is maintained at 50% and the pile reaches temperatures of 140 to 160 F throughout the composting process is critical, she says. A guide to the process and management of animal manure compost is available at https://tinyurl.com/AnimalManureComposting.

"But if just one seed survives being eaten by cattle and escapes the heat in composting, and then is spread onto a crop field, then that one plant can make up to a million seeds in a year," Ikley notes. "Even in direct competition with a crop, these plants can still produce up to 100,000 seeds in a year." 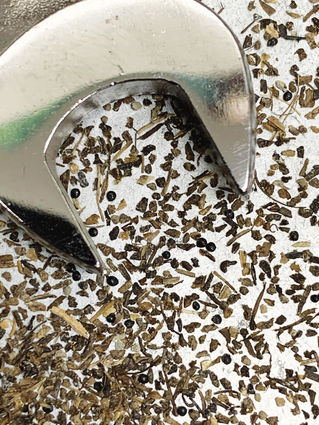 Palmer amaranth seed is sorted out of screenings. (NDSU photo)

"Be sure to look at grain screenings with attention to weed seeds and consider how best to manage the weeds," he adds. "That cheap load of feed might turn out to be the most expensive feed-related problem you have encountered."