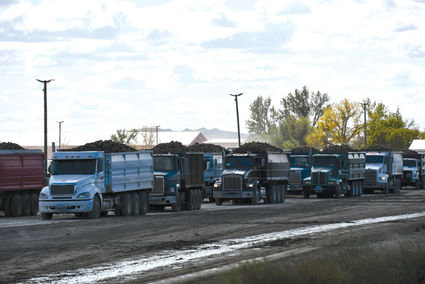 MonDak area sugar beet receiving stations have been receiving truckloads of sugar beets since the end of September.

Peters explained that the area had to stop pre-pile on Tuesday, Sept. 29, due to warm root temperatures. "We are shutting down due to the warm temperatures of the beets. When they go to stockpile, some of them will not be processed until January or February, so we would like them to be at an internal temperature of 55º or less," stated Peters.

The high internal temperature of the beets is caused by the dry soil – when the soil is dry it prevents the root temperatures from cooling down. So therefore, they have to put off pre-pile until those temperatures decrease.

On a positive note, Peters explained that the sugar content of the harvested beets is significantly higher than average. "Sugars are running from 17-20%, which is very good for the start of harvest. We are seeing sugars beyond our expectations. Some areas have had over 20% sugars. We are averaging 18.81 sugar and we are very happy to see that this time of year," said Peters.

He explained that the sugar content usually increases later in harvest, but because of the frost /freeze, the area had at the beginning of the month, those sugar levels were high.

Peters added that the tons of beets are averaging around 29 tons, as of Tuesday, Sept. 29. He explained that they predicted 31.5 tons, but the current number of tons is expected to increase as harvest continues.

Peters hopes that everyone has a "safe and bountiful harvest." He said," We would like to remind area drivers that the beet harvest is on, and those beet trucks don't stop on a dime. Please adjust time accordingly to account for truck traffic for the next few weeks."