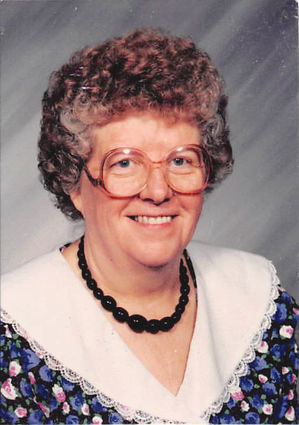 Graveside services for Ruth Nichols, 89, Sidney MT, were held at 2:30 p.m. (MST) Saturday, Oct.17, 2020 at Klempel Homestead Cemetery with Pastor Mike Backhaus officiating under the care of the Fulkerson-Stevenson Funeral Home, Sidney, MT. Remembrances, condolences and pictures may be shared with the family at http://www.fulkersons.com.

Ruth Nichols passed peacefully on to Heaven to join her Savior on Oct.14, 2020 at Eastern Montana Veterans Home, Glendive, MT.

Ruth was born Jan. 5, 1931 to Hugo and Mary (Nollmeyer) Klempel on their farm near Lambert, MT. She was the fifth of six siblings. As a child she helped herd 2,000 head of sheep during the summer. The family only spoke German at home so Ruth had to learn English when she started school. After graduating from Lambert high school in 1950, Ruth went to St Paul Bible College for the fall semesters. She stayed home to work on the farm during the rest of the year as her father had passed away when she was 15. During the next 10 years she attended several colleges off and on. In 1960 she graduated from Seattle Pacific College with a Bachelor's Degree in Music Education. Ruth taught band for several years and directed a church choir. She also taught school in South Dakota, North Dakota, and Montana.

In 1965 she married Gilbert Lepel and they lived in Sandpoint, ID. To this brief marriage was born one son, Bert. Ruth was a very devoted mother. While raising her son she also took care of her aging mother until 1978. Ruth lived various places in Montana, North Dakota, South Dakota, Idaho, Washington, South Carolina, and Florida. She experienced many hard times but she had amazing family support and her faith in God was strong. Ruth wanted her son to attend a Christian school, so she started one in her basement in 1975. She taught several students there for a year and then asked Bible Baptist Church to take on the school and they agreed! Liberty Christian School is still in operation to this day. In 1980, Ruth graduated from Eastern Washington University with a Master's Degree in Guidance Counseling. She worked as a counselor at Pensacola Christian College, Florida and then later at Culbertson school.

After retiring Ruth became a "snowbird" and spent winters in Arizona where two of her siblings lived. She enjoyed taking oil painting classes with her sister. In April 2004 Ruth married Bob Kelly who passed away on their honeymoon a week later. Then in Sept. 2005 she married Richard (Rick) Nichols. At the family's request, Rick had gotten a checkup to make sure he was healthy and he passed with flying colors! Rick was diagnosed with cancer shortly after they married and he passed away a year later.