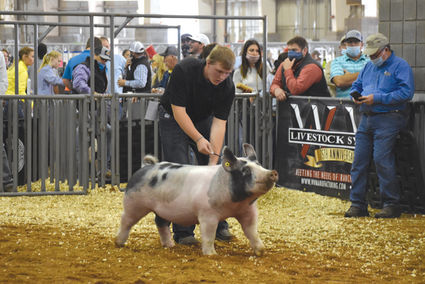 At the virtual NILE, he showed two crossbred barrows: a calico and blue-butt barrow. These animals were awarded the titles of overall Grand Champion Barrow and Reserve Champion Barrow. "This show was done virtually this year, which made it more challenging, as we had to get a great video and then compete this way," stated McNally

At the American Royal Livestock Show, He showed two market barrows. Out of 900 pigs, he placed 6th in class with his blue-butt barrow and 2nd in class with his calico barrow. He added, "This national show is very tough; we always go in hoping to make it in the Top 6 or better."

McNally explained that the best part about showing livestock is the memories and friends he has made along the way. He said, "I have made many friends and am always meeting new people in the industry. I also like that it allows me to spend quality time with my family. I have two little sisters and a cousin who are always around and learning and I (for the most part) usually like having them around!!  Showing livestock has taught how important it is to always be a great role model."

McNally not only spends his time perfecting his showing skills, he also dedicated many hours to helping others. He has put on many showmanship clinics, where he shares tips from how to feed your animal, proper skin and hair care, and showmanship tips. He said, "Some of my pride comes from those individuals and friends who I have helped this past year better their overall market animal and also their showmanship skills. To see those friends get better and better and more passionate gives me a lot of pride."

Cooper's dad, Jason McNally, explained that Cooper dedicates many hours to his livestock. He said, "As it is with anything, you have to put in the time in order to have success and Cooper has always 'put in the time.'"

Jason enjoys seeing Cooper's passion thrive at livestock shows. "It brings me great pride to see the passion Cooper has for his livestock and the industry. There is much more to showing than just showing up in the ring....its hours and hours of work to prepare for the ring. And once he's in that show ring, he has to realize what angles he needs to take to give the judge the best possible view of his animal. He has to figure out the strengths and weaknesses of each animal he shows, so that the judge isn't given a "bad view". I also love that he continues to want to attend clinics to learn more and more and come back to our counties and neighboring counties to share that knowledge with everyone. He so enjoys seeing others have success!! That's truly inspiring to me as a dad."