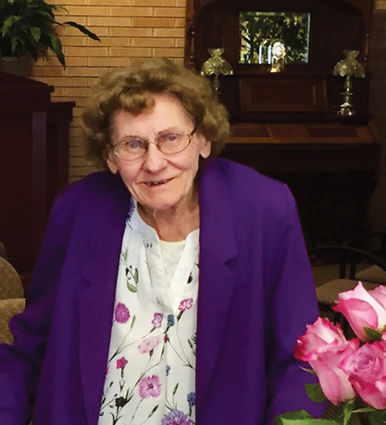 Verna May Bouchard slipped peacefully from this life on Wednesday, Nov. 18, 2020 at St. John's United nursing home, just three weeks from her 93rd birthday. She was born Dec. 7, 1927 to Dave and Anna Thiessen,Lambert, MT.

Verna graduated from Lambert High School and went on to study at St. Paul Bible Institute, MN. While there, she worked as a clerical secretary in the Christian & Missionary Alliance Midwestern District. After returning to Montana, she worked as a secretary for the Richland County Sheriff, and later as a clerk for the Richland County Attorney. In 1956, she returned permanently to the ranch to help her stepmother, Clara Thiessen, with the family farm after her father's sudden death in a tractor accident. During that time, she met Arthur W. Bouchard from Midway/Crane, and the two joined in marriage Sept. 9, 1958. They made their life together raising children on the DH Ranch. In the 1970s Verna took a secretarial position at Nortana Grain Company, Lambert, MT, a job she loved due to her interactions with area farmers and ranchers and their families. She and Art lived five miles south of Lambert until Art's passing in 2012, after which she moved to St. John's United assisted living, Billings, MT. While there, she continued to form many friendships and thrived for eight years.

Verna stayed in touch with her family and friends via telephone and colorful emails. She enjoyed listening to daily Bible programs on Glendive's KGLE radio over the Internet. She had an incredibly sharp and inquiring mind, asking anyone who called or wrote about their lives. We all knew she prayed for us constantly, and that she considered herself engaged in our lives even over the many miles. She was a constant prayer warrior, quoting scripture and hymns in nearly every conversation. Verna lived in the confidence of knowing her eternal future was secure in Jesus Christ, her Savior and Lord. She lived her faith and set a solid example that suggest her desire to "finish well" was accomplished. Her favorite scripture was I Peter 5:7, "Casting all your cares upon him, for he careth for you, (KJV), and her favorite hymn was "I Will Pilot Thee."

A Spring 2021 Memorial Service is being planned.