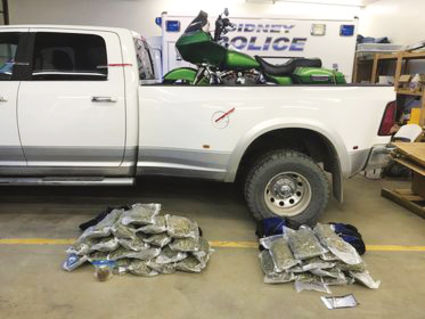 The pot and pickup seized in the Gubler case. (Photo submitted)

A pre-sentence investigation will be ordered. A sentencing hearing has been scheduled for 10:30 a.m. on Jan. 4, 2021.

According to court documents, a traffic stop took place on June 19, 2020, at about 10:06 p.m. The Sidney Police officer could smell the strong odor of fresh marijuana coming from the vehicle. When the officer shined the beam of his flashlight into the back seat, he saw several large luggage bags.

During enforcement action in the patrol vehicle, the officer asked Gubler how much marijuana was in the vehicle. He answered, "Enough to get me in trouble." He was also transporting a motorcycle in the bed of his pickup. After being questioned more about the marijuana, Gubler ultimately denied consent to search the vehicle. He was released from the scene with a warning for a headlamp violation.

The vehicle and motorcycle were seized and secured at the Sidney Police Department's car barn.