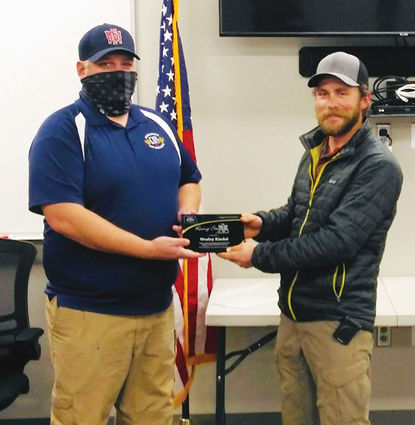 "Wes has been an active EMT-B for at least one year. He pursued this certification on his own to better his community and fire department and then once certified, he took it as a catalyst to join the ambulance district.

Wesley, from the onset of his endeavor to become a certified EMT-B, went after it on his own dime and time in addition to a full time job. He studied immensely, practiced with others on his own time to better grasp and understand the treatment procedures and levels. Once Wesley became certified, he brought a level of care to the Arnegard QRU that was above all the other members, which bolstered the QRUs abilities and level of care. He then joined the ranks of the McKenzie County Ambulance Service and when he isn't working his full time job he often spends the majority of his "free" time serving as an EMT on the ambulance service. Wesley also brings his EMT-B abilities to the Badlands Search & Rescue team and in that, he now benefits 3 state-recognized EMS teams!

Wesley is diligent and disciplined, calm under pressure, and dedicated beyond reproach to his skills and to his community at large. He proves this day in and day out with his time and schedule that he allots to the community through his EMS service."