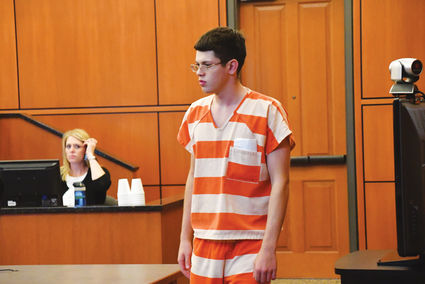 Severson pleads not guilty to deliberate homicide in District Court on July 15.

A 21-year-old Sidney man was sentenced to 40 years in the Montana State Prison for the offense of mitigated deliberate homicide during a sentencing hearing under District Court Judge Olivia Rieger on Friday, Dec. 11.

Kyle Lee Severson was found guilty of that charge by a jury trial in October after fatally shooting Tyler Hayden at Sidney's Loaf-N-Jug convenience store's parking lot on July 2, 2019.

Rieger sentenced Severson to 40 years with no parole restrictions. He was ordered to pay $3,500 in restitution. He will be given credit of 527 days served.

The judge said she considered alternatives to prison. "But the fact is the matter of accountability is important," she noted.

Rieger said she took in account Severson's age and little criminal history. She mentioned that Severson's 61 "write-ups" during his time in the Richland County Detention Center displayed a lack of respect to authority and a lack of maturity.

Richland County Attorney Janet Christoffersen was seeking a sentence of 40 years with five years suspended and no parole available for the first 20 years. She noted that Severson hasn't accepted responsibility for his actions, and that rehabilitation will be difficult without remorse.

Christoffersen said there was no evidence that the victim carried weapons. "The defendant has been aggressive. He's been the aggressor."

She noted that Severson displayed remorse for himself but not for the victim. She described the death of Hayden as a senseless loss.

The defense maintained that Hayden made prior threats to Severson, and that Severson was protecting himself and loved ones at the scene.

Defense attorney Kevin Chapman said Severson's rights were violated when discovery evidence wasn't revealed in a timely fashion. Chapman described it as a travesty of justice.

Chapman said Severson was being a responsible person and carried a gun to protect himself. "He acted in a manner that he felt was necessary," Chapman noted.

The defense asked for a minimum sentence and no restrictions on parole. The attorney pointed out parole restrictions are usually for individuals such as serial killers or maniacs. "This isn't that type of case," Chapman said.

The judge heard comments from both the defendant's and victim's family members and friends during the hearing.

Family members of Hayden urged the judge to decide on a 40-year sentence. They also questioned whether Severson had any remorse for the victim.

"It as if he was describing his tax returns," Anissa Gillespie said of the manner that Severson testified about the night of the crime.

Family members of Severson described the 21-year-old as kind and full of potential. They said he isn't a threat to society.

They said Severson displayed maturity and remorse by coming directly to the detention center after the shooting.

During his testimony at the sentencing hearing, Severson said, "I regret ever going to the store that night."