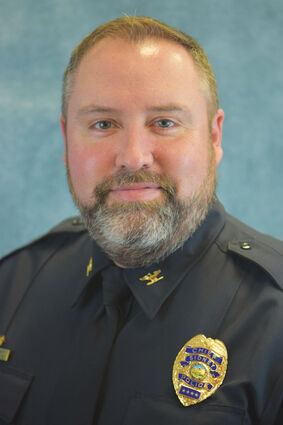 He felt that accepting this position was just a part of a "natural progression" throughout his time at the Sidney Police Department.

"Having been a part of the Sidney Police Department for over a decade, I felt a real connection to the department and community and just felt that this was a role that was very important to me. I knew that I could bring a lot of good things to the position. As far as helping the department carry forward into the future and still have a connection with the officers - having come up through the ranks," stated Kraft.

Kraft was born and raised in Billings, and graduated from Montana State University - Billings. He moved to Sidney, in 2010 with his wife, Crystal, to pursue a job with the Sidney Police Department in 2010, where he served as the department's lead investigator for a number of years.

Kraft has really enjoyed his time at the Sidney Police Department. He explained, "On these more serious incidents, it is really gratifying to be able to help families deal with a very unfortunate situation and making sure that justice is served."

One of Kraft's favorite things about working in the department is giving talks to the students at Sidney High School. "I enjoy doing that because it gives me a chance to look at my job through someone else's eyes. Sometimes the kids have an understanding of what we do, and sometimes they don't so it is kind of fun to be able to talk to the kids about that kind of stuff and educate them about law enforcement in a small community like Sidney," added Kraft.

Since Kraft obtained the position as Sidney Police Chief, his main goal has been to maintain the great relationship that the department has with the Sidney community. He said, "I would really like to focus on making the Sidney Police Department kind of a model of accountability and transparency. Modern policing is under some intense scrutiny, and I think nowadays our police departments must be absolutely transparent."