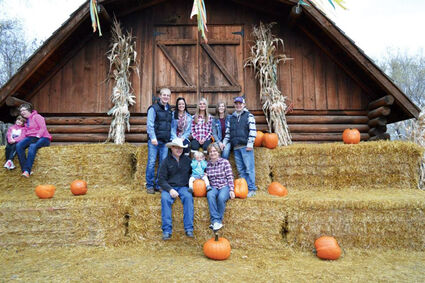 Doug and Ceylon Feiring with their family, who all work together to make Feiring Angus Ranch successful.

Doug and Ceylon Feiring own Feiring Angus Ranch, along with sons, Brett and Brady, and daughter Shambre. One of their major philosophies is, "To never overstock pastures with more animals than the land can handle." Generation after generation of Feiring Angus has all received the same lecture. Feiring Angus does not use popular genetics in their breeding program, for they believe that cattle should adapt to Mother Nature the way that Mother Nature intended it. They strive to produce cattle that will return the most profit with the least input and labor.

Ash Coulee Ranch was started in 1967 by Anthony Davis with the purchase of 13 heifer calves from the Bob Joyce dispersion. They calve from 100 to 140 registered Angus cows a year depending on weather and the hay supply. As with Feiring Angus, Ash Coulee has always tried to raise cattle in touch with Mother Nature and the environment that northern North Dakota will allow with very little extra supplement.

Scott Davis bought the ranch from his father in 1980, and with help from his family and his brother, Davis has continued the progress that his father started. Ash Coulee has selection pressure developed a cowherd that is very easy calving with excellent maternal traits, and has never been creep fed. The Ash Coulee cow must calve unassisted, raise a big calf, and breed back in time with what Mother Nature will allow. No exceptions.