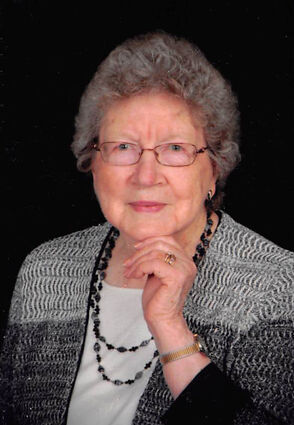 Memorial services and luncheon for Ethel Hawley, 95, of Fairview, MT, will be held at 10:00 a.m. on Wednesday, March 31, 2021 at Zion Lutheran Church in Fairview with Pastor Audrey Rydbom officiating, under the care of the Fulkerson-Stevenson Funeral Home of Sidney. Remembrances, condolences and pictures may be shared with the family at http://www.fulkersons.com.

Ethel Christine (Meldahl) Hawley (95) passed away peacefully at her home on Saturday, January 23, 2021 after a courageous battle with cancer. She was surrounded by her loving family.

Ethel was born in a little farm house, her father built, near Four Mile, Montana, on December 21, 1925 to Almer and Johanna (Dybfjord) Meldahl, one of seven children.

According to a letter she left behind for her children, she said she had a "very loving upbringing and had a lot of fun, playing with paper dolls, sledding, listening to radio shows, playing games, eating popcorn, fudge and special foods, especially homemade bread...yummy!"

Ethel attended grade school at Sweger and Four Mile. She graduated in 1944 from the Fairview Consolidated School after which she worked at Holly Sugar and then The Richland National Bank where she met the love of her life, a handsome Marine named Harold Hawley. Harold asked her to the cinema and she actually heard bells on their first kiss. They were married two weeks later, on June 18th, 1945, after a whirlwind courtship. Harold was still in the Marines so they went to Santa Barbara where he was stationed. That "whirlwind courtship" lasted 49 years until Harold's death on his 70th birthday in May of 1994.

Ethel was a lifetime member of Four Mile and Zion Lutheran Churches where she was active in Ladies Aid and teaching Sunday school. Ethel was also a member of Fairview Senior Citizens, looking forward to their Wednesday card days.

Ethel was an avid reader and she enjoyed working on crossword and jigsaw puzzles, playing cards and board games with her children and grandkids. She even played Legos with her great-grandkids.

Ethel's family knew not to call her at 3:30 or 5:30 as that was the time Jeopardy and Wheel of Fortune was on.

The family requests that memorials be sent to Zion Lutheran Church, Fairview.

Special thanks to Home Health nurses Alyssa and Josie as well as the Sidney Health Center Hospice nurses.

A Memorial Service and luncheon will be held on Wednesday, March 31, 2021 at the Zion Lutheran Church at 10:00 a.m. with Pastor Audrey Rydbom officiating.