Dr. Franzen To Address Stratification Of Acidity In No Till Soil 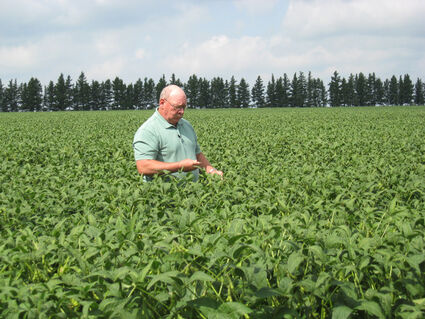 Dr. Franzen has done extensive research on site-specific nutrient management, soil fertility, soil and nutrient loss caused from wind erosion. He received his BS, MS and PhD from the University of Illinois, Urbana, IL. He completed his PhD in 1993 with a thesis addressing field variability of P, K, and soil pH in two Illinois fields with the results published.

Dr. Franzen will be speaking about research from his and other NDSU researchers work with stratification of acidity in no-till soils at the National Hard Spring Wheat Show.

In 1996, Franzen did a soil sampling survey of North Dakota and performed hilltop, slope and depression sampling within a field in three areas in every county in the state. Through this research, Franzen found that there were large regions that had soil pH less than 7, with some regions having pH in the 5s. He said, "At this point it really wasn't a problem because even the acidic pH we had at the time were not low enough to harm crop growth; but later growers started experiencing problems with low pH."

In 2014, Franzen started getting calls from Montana about areas that couldn't grow crops anymore. Soil samples from those problem areas crops had soil pH less than 5, and the acidity was even worse in the surface 2 inches of the soils. He added, "We found that the problem was that nitrogen had been being applied near the soil surface in no-till soils for a long time. When ammonium nitrogen is applied in whatever form, fertilizer or manure, the bacterium in the soil changes that to nitrate which releases hydrogen ions (H+) in the soil. The measure of H+is pH."

Franzen explained that soils that have not previously had free lime (soils with pH less than 7 naturally) are subject to decreased pH over time. "About five years ago, we started having those same phone calls in North Dakota, particularly in the southwest part of the state, but also in some areas in the North Central part of the state around Minot. Those were the areas that were identified in my first survey that tended to be a little bit acidic anyway, but some of the pH tests from those fields were coming back from the lab with values under 5." stated Franzen.

He explained that when pH is less than 5, the aluminum in the soil becomes soluble and so does the manganese. "Aluminum is bad because it tends to plug up roots and precipitates out when it gets inside the roots, and it prevents the plant from taking up water and nutrients. In certain crops, like canola, the soil manganese becomes way more soluble and it becomes toxic to the plant."

This issue has been becoming increasingly problematic for farmers in western North Dakota. It is currently being addressed by Dickinson REC area agronomist Ryan Buetow; and formally NorthCentral REC area soil health specialist and now Dickinson REC director Dr. Chris Augustin. To hear more about research currently being conducted on stratification of acidity in no-till soils in North Dakota, be sure to attend the National Hard Spring Wheat Show!