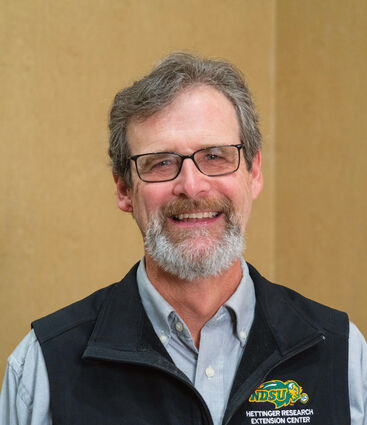 Rickertsen has had many years of experience working with a wide variety of crops. His research interests are on agronomic issues facing growers in southwest North Dakota.

Since 2013, Rickertsen has been working at the Hettinger Research Center where he has been performing research on variety testing, cultivar development, alternative crops, herbicide trials, fertilization, cover crops, crop rotations, and no-till production practices to improve the sustainability of crop production.  "I have been working in the western Dakotas for the last 25 years. Before coming to Hettinger, I was a research associate-agronomist with South Dakota State University, Rapid City, SD, for 19 years and I did research on soybeans there as well."

Although Rickertsen has worked with a variety of different crops, he is particularly interested in soybean production. He explained, "I am currently working on a plant population study, where I am looking at targeting what soybean planting rates look like when it rains 18 inches or more on average and what it looks like when it rains 15 or 16 inches on average. I have been doing this study for three years and am looking at probably working on this for another two years."

At MonDak Pulse Day, Rickertsen will be talking about the importance of finding the right maturities and will go over plant population, what fertilizer requirements are, the importance of inoculants, and how to keep costs down. His discussion will be a general overview of his findings of growing soybeans in a much drier climate than that of what they are typically grown in.

Rickertsen wants attendees to learn what it takes to grow soybeans in western, North Dakota. He said, "Soybeans are certainly going to be more of a risky crop because they need moisture, especially during late July and the beginning of August, which is when we can often turn kind of hot and dry. So, they are a little bit risky, but the Hettinger station has averaged around 22 bushels over the last 18 years. So, soybeans actually do better than most people would think."