By Jody Wells and Jessica Lyons 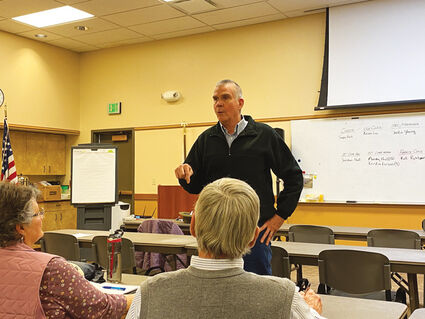 Recently elected US House Reprehensive Matt Rosendale visited the Sidney area last week. Rosendale was in town from Feb. 15-17 and visited with area Republicans, toured local businesses and held a Q & A session at the Richland County Commissioners office.

Rosendale's Q & A session was with community leaders and local citizens. He began the meeting with an overview of his first 45 days since taking office. Rosendale described the stark differences between the atmosphere in Washington compared to Helena when he was in the Montana legislature. "We all work together here, both Republicans and Democrats back here. We are used to trying to get things sorted out for the state," he said. "That's not how Washington is folks. We went in there on the very first day. I was disappointed that Speaker Pelosi gave a very mean spirited, divisive speech. Day one, wow!" he continued.

Rosendale then spoke about certifying the electoral college votes for the 2020 presidential election. He wanted to clear up any confusion about what took place about the electoral college certification. "Congress was not sent there as a ceremonial process just to wave all format and say, 'we accept it' and its over and done with. It is very clearly stated between the Constitution and the Electoral Act of 1887 that we are there to accept or reject those electors," he said. "I do not want to see the federal government taking over the election process. The states need to do that. But what we had to do that day was to basically certify the integrity of those elections. That's what it was about. It wasn't about Donald Trump. It wasn't about anybody's campaign or any candidate. It was about certifying the integrity of those electors. And when we had thousands of sworn affidavits. Numerous credible allegations of fraud and irregularities from several states."

Rosendale felt that several states had problems that need to be exposed. "Those are the electors that I rejected. Now I'm not trying to overturn the election. What I'm trying to do is say, the process that they had there did not pass the smell test," he stated. Rosendale challenged the certification of the electors of Pennsylvania and Arizona. These were only states that both a senator and a house member objected.

Editor's note: The affidavits presented in numerous court challenges by the Trump campaign did not provide the evidence to convince judges to change enough votes to overturn the results of any of the state elections.

After the process took place and all the votes were cast Joe Biden was elected president. Rosendale accepted the results and attended the inauguration. "That is what we do. I support these institutions. The institutions that our constitution has set up are very important to me," he said.

Rosendale then moved on to describe the impeachment. He didn't feel there was due process for former President Trump because there was no committee hearing and no witnesses. "They brought the impeachment resolution up, they had a bunch of debate on one day on the floor. No testimony, no sworn testimony," he said. "Then they took a vote and obviously the majority, the Democrats do have a majority, and they sent it over to the Senate."

Rosendale also took issue with Senate por temporte Patrick Leahy presiding over the Senate hearing. "If you don't consider anything else about that impeachment process consider this, the constitution clearly states that it is to be presided over by the Chief Justice of the Supreme Court. John Roberts said no thanks I'm not participating in this," he said. "That was an unconstitutional process."

Rosendale also feels his previous experience will serve him well in the health subcommittee in the veteran's affairs committee. "The last four years all the work that I have done in the auditor's office on driving down the cost of health care and expanding access, that's going to work well," Rosendale is the ranking Republican member charged with managing technology modernization handling veteran's records from Department of Defense and Veteran's Affairs. His experience handling telemedicine and cyber-security in the Auditor's Office will be instrumental in making these records work cohesively between these two department's systems.

Rosendale then transitioned to border security and how it affects the country and Montana. "Illegal immigration affects us in a big way when we start looking at the reservations and the ease at which they can bring in illicit drugs, have sex trafficking and human trafficking," he stated. Rosendale also mentioned the loss of jobs on the border due to the Biden administration's shift in border policy.

Duane Mitchell, Richland County Commissioner, asked a follow up question, "Is there is a way Congress can slow these sanctuary cities down." Rosendale said, "Yes, yes. They can rein in on them by taking away tax breaks on municipal bonds. Everybody's been trying to figure out how to keep these sanctuary cities from being able to just open up and not have any recourse, right? They talk about removing funding."

Richland County Commissioner Shane Gorder asked about changes to the border policy at the northern border under the new administration. "I don't think we will have the concerns that we are going to have the pressure to eliminate the security on the northern border that we have on the southern border because it's not such a hot topic politically," Rosendale replied.

Gorder then asked what can be done at this point to reinstate the permit. "You have to put pressure on John (Tester)," he stated. The amendment does have a chance to be inserted in the reconciliation bills for the next three years. "You have three reconciliation bills. Fiscal 21, fiscal 22, fiscal 23. So there's actually three bites at the apple." Rosendale also commented that it is a national security issue as well as costing the state $80 million and job losses.

Editor's Note: Senator Tester did write a letter to President Biden on Feb. 2 urging him to reconsider his decision to cancel the presidential permit for the Keystone XL Pipeline.

Rosendale was also asked if the value of Bakken oil will be lowered with the introduction of the Canadian Tar Sands oil from the Keystone XL Pipeline. "The Keystone XL coming through here with the 100,000 barrels of a day from the on-ramp down in Baker, what we are going to see is the Bakken oil is going to become more valuable," he stated. The pipeline would decrease the transportation costs and is used to blend with the Tar Sands to make it more sellable.

Sidney Mayor Rick Norby's biggest concern is regarding the possible increase of the minimum wage to $15 per hour and it's financial impacts on the operation of the Sidney Svarre Municipal Pool. The pool currently starts new employees at Montana's minimum wage of $8.65 per hour. Rosendale stated that he has been a long time opponent against the wage increases. "I was on the legislature floor many times and testified against it." It was also stated that the CBO said it would eliminate 1.4 million jobs. Rosendale also went on to explain how wages here were $17.50 an hour due to inflation from the oil boom, when it all simmered back down the wages came back down as well. "It wasn't set by anybody, not the county, city or state, but by supply and demand."

Commissioner Gorder asked Rosendale his take on the approach going forward in recovering from the impacts on our society from Covid. He expressed the challenges of being in an area on the border of two states with different sets of Covid protocols. "I think the legislature took a very, very strong step by granting the liability immunity. That had to be done. I was trying to get that done at the federal level but it's not going to happen up there right now," Rosendale said. "I think the delivery of vaccinations around the county is going to help establish herd immunity. Herd immunity works." Rosendale also mentioned the use of treatments such as hydroxychloroquine and ivermectin for Covid.

Editor's note: Currently the FDA has cautioned the use of hydroxychloroquine for use outside a hospital setting or clinical trial due to risk of heart rhythm problems. The FDA has yet to granted emergency use of ivermectin for the treatment of Covid-19. There has been a recently released research article that shows promising results in a laboratory setting but additional testing is needed.

Rosendale stressed the importance of opening up our society again. "We have got to get our businesses opened up, we have got to get our schools opened up. It is not good for people to be isolated. Whether we are talking about the students or the general population," he said. "The depression and the additional substance abuse that starts taking place. It is not healthy for people to be isolated."

Gorder then posed the question, "Why open up when you are continuing to get money to keep your doors closed?" Rosendale is skeptical on the need for additional Covid relief funding. "We still have very close to the neighborhood of $9 billion, almost a trillion dollars available at the federal level that has even been distributed back out," Rosendale said.

Richland County Health Department administrator Brittney Peterson stated the importance of supporting the health department in combating the challenges of Covid in our community. She stressed the importance personal responsibility and how the use of masks has helped our schools stay open. Rosendale added that he was pleased with the advancements in telehealth & the contributions of the telecommunications industry in meeting those needs. He does think that broadband needs to be expanded to accommodate those without access. Rosendale also thinks that HIPA laws should be relaxed to use telehealth more broadly.

Peterson added to the discussion that the ability for the schools to be open gives the parents ability to return to work. "We have got to get the community healthy and then we can get the economy healthy," Rosendale stated.