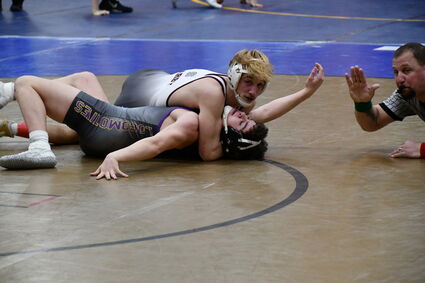 Sidney/Fairview's Jordan Darby gets the pin against Owen Younger, Laurel, in 3:22 in the quarterfinals on day one of the MT Class A State Tournament on March 5.

The Sidney/Fairview High School wrestling team is in first place after the first day of action at the Montana Class A State Wrestling Tournament held in Miles City. Sidney/Fairview leads with a score of 141. Frenchtown is in second with 105 followed by Laurel in third with 91.5 points.