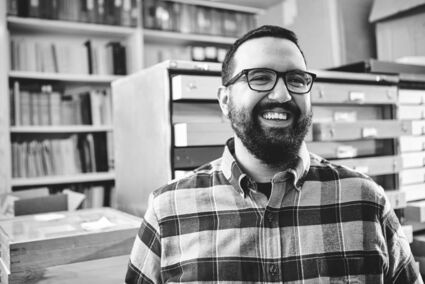 Vinicius Ferreira, who will finish his doctorate at MSU this summer, received the Marie Skłodowska-Curie Individual Fellowship last month.

Bozeman - A Montana State University doctoral candidate recently received a prestigious international fellowship to continue his research on beetle evolution at the Natural History Museum of Denmark at University of Copenhagen.

Vinicius Ferreira, who is part of MSU's Entomology Group, will complete his doctorate in MSU's Department of Plant Sciences and Plant Pathology in College of Agriculture this summer. Ferreira received the Marie Skłodowska-Curie Individual European Fellowship in February. He was one of just over 1,600 recipients chosen from 11,000 international applicants across all disciplines. The award is named for renowned Polish-French physicist Marie Skłodowska-Curie, who researched radioactivity and was the first woman to win a Nobel Prize, ultimately receiving two in her lifetime.

"These very prestigious awards from the European Commission are the European Union's flagship fellowship program for researchers," said Michael Ivie, Ferreira's adviser and associate professor of entomology in Department of Plant Sciences and Plant Pathology. "They are awarded in an open competition in all fields of science, open to applicants world-wide. For Vinicius to receive one is a really big deal. This highlights the quality of students we have at MSU and the quality of work they are doing."

Ferreira's doctoral research focuses on a family of beetles called Lycidae, known as net-winged beetles, which are related to fireflies. Last year, he and collaborators at University of Florida discovered a new lineage of fireflies in specimens from scientific collections from a number of museums.

With the help of the two-year, 219,312 euro fellowship - around $260,000 by current exchange rates - Ferreira will craft his postdoctoral research around a largely unexplained evolutionary phenomenon called paedomorphosis, through which adult beetles retain the characteristics of their juvenile forms, which in beetles means traits of larvae and pupae.

"If you think of most domestic animals like dogs or cats, they look different from their wild forms in a few different ways," said Ferreira. "For example, in dogs, most domesticated adults have floppy ears, softer fur and a pretty mellow personality, which are all associated with puppies, their immature forms. Wild adult dogs, on the other hand, have coarser fur, have a more aggressive personality and their ears are always upright. Those changes in morphology are examples of paedomorphosis."

Paedomorphosis, Ferreira said, has occurred in several beetle lineages independently. His work in Copenhagen will seek to understand the phenomenon, identify whether the same evolutionary mechanisms are causing the change in each of the affected lineages, and see if that knowledge applies to other animal groups.

"What happened is that paedomorphosis has occurred multiple times in different species of beetles, resulting in a similar appearance in groups that are distantly related, and we don't know why or what has caused it," he said. "We also don't know if the modified anatomy and similarity of adult individuals with their immature forms have occurred through the same biological mechanisms in all beetles or if they have independently converged toward a similar appearance."

The Marie Skłodowska-Curie Individual Fellowship requires recipients to conduct their work at a European institution. Ferreira will collaborate with one of the top beetle specialists in Europe, Alexey Solodvnikov, who is also an entomology curator at Natural History Museum, Denmark. Solodvnikov's research incorporates both morphological and genetic elements, which Ferreira said would help him develop new facets of his own work. Ferreira plans to move to Copenhagen late this summer after finishing his doctoral studies at MSU.

After five years living in the United States, Ferreira, who is from Brazil, is looking forward to extending the geographic and academic work of his research.

"This is one of the more prestigious fellowships in the world. They fund all kinds of research with this program and they thought it was worth it to fund this beetle project," he said. "That's pretty exciting."