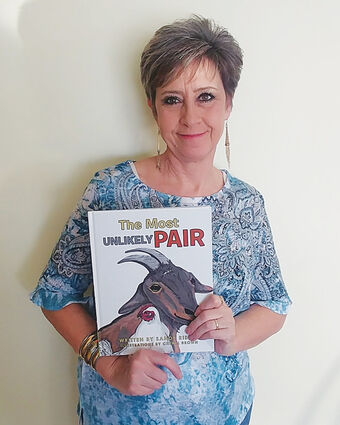 Sandy Rieker with her new book "The Most Unlikely Pair." (Photo submitted)

After over a year of hard work and creativity, Sandy Rieker and Cheryl Brown, Watford City, had their book, "The Most Unlikely Pair," published.

The story piece of the book was inspired by a program Rieker operates called, Tater Tots, which is designed for kids four years old and younger to have fun and meet new friends. She said, "At Tater Tots, we will have a family there and then the next week they are gone, and they leave because they are following the oil. So, I thought how hard that must be on the little kids, so when I thought about Hershey's life it was similar to this situation so that's how I came up with the story piece of it."

She knew she needed a creative artist to illustrate the characters of the book, so she contacted Cheryl Brown. Rieker said, "Cheryl brought the pictures in the book to life. She came out to my farm and watched the animals so she could get an idea in her head of who looked like what. It took her a long time, and she did a fabulous job."

On Sept. 23, Rieker and Brown received the finished book, but neither of them was satisfied with the product so Rieker had offset printing done to it. She said, "The offset printed version came out in January and we were very happy with it."

Since September, the book has been available for purchase. You can find the book in several stores and locations including the Pioneer Museum of McKenzie County, The Roundup, Sidney Mercantile, MonDak Heritage Center, Barnes & Noble, Amazon, Ferguson Bookstore, The Brick Oven Bakery, Prairie Creek Mall, and Huntington Books, and even stores in Grand Forks and Fargo, ND.

Rieker and Brown's goal is to develop a book series. She added, "For now Cheryl and I just said we want to be in the moment with this one and you know it's a lot of work and we wanted to just celebrate this book."

Rieker would also like to see the book be used as a teaching aid in classrooms. "I want to get this book out there in schools because it has such a great underlying message of change can be good, always believe the best, and be ready to forgive."