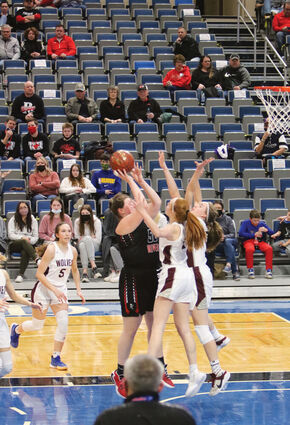 Watford City's Ashley Holen and Madison Spacher defend the lane against Grand Forks Red River in the opening round of the Girls Class A State Tournament. After trailing by 10 at the half, the Wolves put up a good fight, cutting Red River's lead to one with just under 5 minutes to play. The Roughriders tough defense held the Wolves to just 2 points in the last 5 minutes of play, ending the season for the Wolves. The Roughriders went on to win 62-51. (Photo by Kathy Taylor)