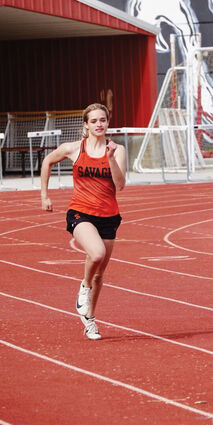 Brooke Reuter, a freshman at Savage High School, broke two new records and tied an additional record for her school.

"For the track meet my main focus was on the 400. I wanted to break the school record and qualify for State in it, but as the day went on, I broke other records and qualified in other events. Which was crazy to me," said Reuter.

When asked why she thinks she performed so well, she responded, "The week before the meet I worked on the little things. Like block work, got in a little more shape, and I had my goal set and knew what I wanted - to break some school records."

Her favorite thing about competing in track is meeting new people, racing, and the joy of winning. She said, "I like seeing what hard work can accomplish. "

Her future goal for the 2021 track season is to set personal records for every meet, qualify in the 400M, 200M, long jump, and set more school records.