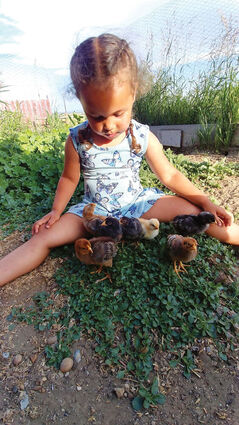 On Monday, June 7, the City of Sidney Council members will have the opportunity to give Sidney residents back some of their freedoms. In the first city council meeting of the summer, Jaymi Mozeak will be going before the council to request the current ordinances concerning livestock be eased to allow city residents to own and keep chickens on their property. She will also be presenting them with a petition signed by Sidney residents wanting chickens in town.

Jaymi grew up on a small hobby farm in a small town and so had the pleasure of caring for chickens and our animals for most of her childhood. She had moved to Sidney several years ago than away but returned to settle and raise her son. She said, "One of the first things I did when I came back was go to the police station and ask if I could have chickens in town after I bought a house. I was surprised and very disappointed when the officer brought me a copy of the ordinances concerning animals. I had just moved from a small town in South Dakota where hens were legal to keep in town. I thought it had become normal."

The current ordinance restricts all city residents from keeping any livestock within city limits. This includes chickens. Believe it or not, this is odd for towns not only in eastern Montana but all over Montana and the rest of the nation as well. Many towns and cities across the nation allow chickens as pets to varying degrees. Savage, about 20 miles, describes in the ordinance the type, size, and location of the dwelling allowed for chickens. Glendive residents can keep them too. Larger cities like Billings allow residents to own chickens, as do San Francisco, Seattle, Denver, Atlanta, Washington DC, and millions of other metropolises, cities, and towns in between. The ordinances for each of these cities and towns can be found online on each one's respective website.

Chickens like any other animal, take time, knowledge, and care to bring up friendly birds that are healthy and happy but can be very beneficial to their owners. While most chicken feed is made from grain, according to 4-H Learning Network, chickens are omnivores. They will happily help themselves to any insects, small reptiles, or even mice they can catch while foraging for more grain. Besides providing the usual benefits of owning a pet, chickens can also help their owners monetarily by laying eggs. According to womenshealthmagazine.com's article called "WTF is a Complete Protein" by Christine Byrne, eggs are a complete protein and contain all nine essential amino acids. A rooster is not required for a hen to lay eggs although a hen's ability to lay eggs does diminish temporarily with the seasons and permanently as she ages. 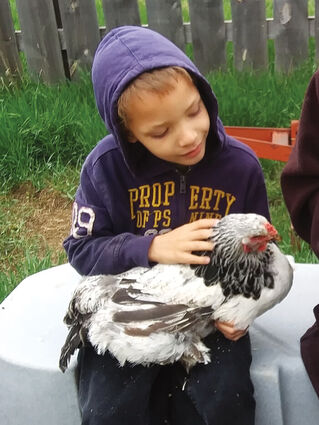 The town of Sidney as a whole can benefit as well from the legalization of chickens in city limits. Not only can the city benefit from fees, registration, or permits if they so choose, but there is an interesting market for products benefiting chickens as pets. Multiple businesses around the country online and with storefronts sell small coops, enclosures, toys, sweaters, harnesses, and even diapers for chickens kept as pets.

"In the end," Jaymi said, "the shortages and temporary movement restrictions that resulted from the events of 2020 have shown me that I, my family, and my friends need to be able to survive without the luxury of finding everything we need at the grocery store every morning. If you have hens that can lay, you at least have eggs." Contact Jaymi Mozeak on Facebook or by emailing her at S[email protected] to learn more about what will be requested or to meet and sign the petition.

Fake news. Chickens are not allowed in Fairview.