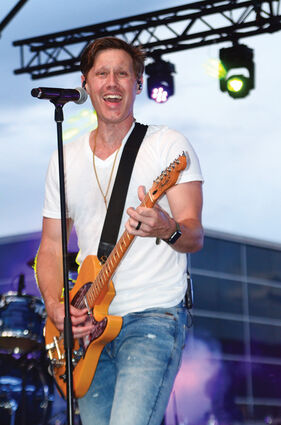 The Life Light Festival, which is a Christian music and entertainment, was held at Rough Rider Center, Watford City, Saturday June 5.

The Christian bands and soloists included "Norden Pass" up first followed by Cade Thompson, "7eventhTime Down" from Mount Vernon, KY and the headlining act, band "Building 429" from Fayettville, NC. The band has been around since 1999. Their name is derived from a Biblical passage known as Ephesians 4:29 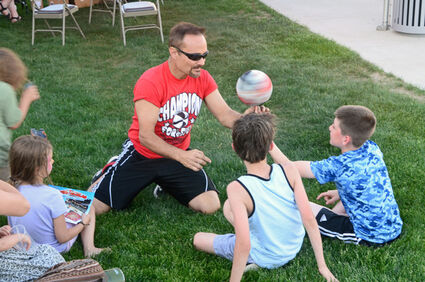 Bruce Crevier, Spin-Tacular Basketball Show founder and five-time Guinness Book of World Records holder for spinning 21 basketballs simultaneously, shows some kids at the event his techniques on spinning a basketball. The kids actually got it to balance for a bit on the end of their fingers, much to their pleasure. Bruce has traveled to over 40 countries with his showcasing his talent and is from rural South Dakota. He also spun one single ball for 22 hours and 12 minutes without a break! (Photo by Roger Riveland)

Between the bands the "Spin-Tacular" Basketball show entertained the crowd in Saturday's high heat. This group was started by Bruce Crevier who is five time Guinness Book of World Records holder for most basketball spinning at once and also the group has been finalists on the show "America's Got Talent". Bruce and his wife, Diane, have 12 children. Many of the children were at the Watford City show and did basketball tricks and also rode 10-foot tall unicycles while juggling basketballs, they also spun balls on extremely tall poles, which was made even more difficult with the outdoor events winds.

The motorcycle stunt riders show "Zero Gravity Outreach" performed a set as well. The riders jumped their motorcycle far above the stage hitting 25-30 feet above the ground at times. Stunts included 360º spins in midair, hanging upside down from their cycles, totally letting go of the bike in midair, and doing a headstand on the rear fender. The crowd was in awe of their perfection.

There were food venders on site and hundreds of people took in the free event. The event ended at 10 p.m. and within minutes a huge heavy thunderstorm with heavy downpours and wind closed out the evening. The mech booths and venders had taken their areas down before the storm so all ended well.