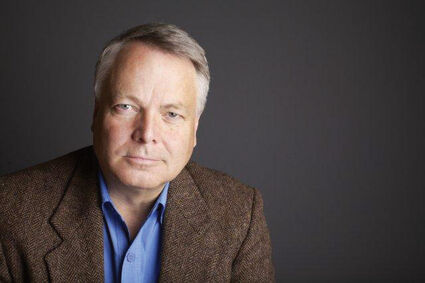 Bismarck - North Dakota humanities scholar Clay Jenkinson was featured on CBS Sunday Morning on May 30 in a feature on the search for the geographic center of North America.

CBS producer Stephen Dustin asked Jenkinson to appear for an interview after learning of Jenkinson's forthcoming book on North Dakota, 'The Language of Cottonwoods: Essays on the Future of North Dakota'.

Jenkinson provided wry commentary on the controversy over the geographic center of North Dakota that now includes three claimants: Rugby, which has held that title since the 1930s, Hanson's Bar in Robinson, which established its own claim in 2016, and Center in Oliver County, which appears to be the best scientifically-determined sit.

"I'm a Rugbyite," Jenkinson says, "but once I began to study the issue I realized that attempting to make a determination of the geographic center raises more problems than it solves." Jenkinson explains that you have to begin with a definition of North America (opinions vary), then figure out a way to overcome the curvature of the earth, and also account for the offshore islands, peninsulae, and Arctic ice sheets. "Not to mention lands emerging because of global climate change and the movement of the world's continents thanks to plate tectonics."

In the CBS segment, Jenkinson made fun of the whole controversy. "It's essentially the same as deciding what midwestern town has the world's largest ball of twine," he says.

Jenkinson's book, to be released at the end of June, has a chapter on the controversy, "The Heart of Everything That Is". "I spent a couple of months doing research on the controversy and discovered that even Rugby is not the right spot for what used to be regarded as the Center of North America. The actual former location was near Balta, more than a dozen miles from Rugby. The cairn was put in Rugby merely because it was the largest community nearby!"

'The Language of Cottonwoods' features chapters on the Little Missouri River, the Bakken oil boom, the 150 ICBM nuclear-tipped missiles in northwestern North Dakota, the roadside effigies that dot the landscape (like Salem Sue and the World's Largest Sandhill Crane), spirit of place on the Great Plains, the search for the sacred, and relations between the white and Native American communities in North Dakota.

Koehler Press, Norfolk, VA, is publishing 'The Language of Cottonwoods'. It is the culmination of Jenkinson's lifelong fascination with North Dakota. "I wanted to try to get to the heart of the North Dakota identity at a time when we don't any longer really know who we are," Jenkinson says. The book is a love song to North Dakota, an analysis of the state of the state in 2021, and a series of musings on possible futures for the last visited and least visited state.

Jenkinson plans a series of book events around North Dakota through the summer.

On Friday, July 9 during Crazy Days in Williston there will be a book signing with Clay Jenkinson from 1-4 p.m. at Books on Broadway, 12 ½ W. Broadway.