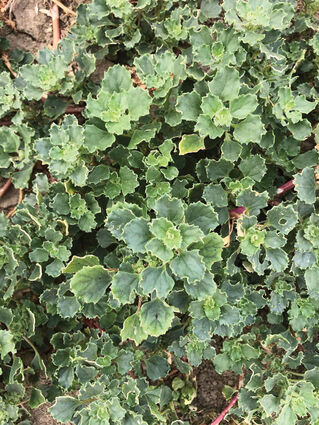 Rocky Mountain Goosefoot, a common weed across Montana, can accumulate nitrite during drought conditions that can be harmful for livestock. (MSU Photo)

Bozeman - Due to the extended drought in Montana, water availability in many areas has become severely limited. Reservoirs have dried up and are becoming covered in weeds. Montana State University Extension educators are cautioning livestock managers to evaluate weed feed and grazing land for nitrate toxicity during drought.

"Due to the severe drought, weeds have become prevalent across pastures and many producers are limited in their cattle movement this year," said Custer County Extension Agent Mike Schuldt.

Although weeds can be high in protein and energy for livestock, caution should be used when cattle are grazing weedy areas or are fed weedy hay, according to Megan Van Emon, Extension Beef Cattle Specialist. Some weeds, including kochia, prostrate knotweed, Rocky Mountain Goosefoot and Lambs Quarter, accumulate nitrate during drought conditions. These weeds may be the only green feed available, and livestock often gravitate to green areas to graze.

Recently, Schuldt and Van Emon investigated a weedy reservoir and collected samples for nitrates. When analyzed through a Nitrate Strip Test, the Rocky Mountain Goosefoot had approximately 50,000 ppm of nitrate and the Lambs Quarter and knotweed had approximately 10,000 ppm of nitrate. Van Emon said these levels are extremely high and should not be fed to livestock. Nitrate Strip Tests are available at MSU Extension county offices.

"These weeds were extremely worrisome due to their ability to accumulate nitrates, and this became more apparent after we watched a cow grazing in the area and eating the Rocky Mountain Goosefoot," Van Emon said. "The producer indicated that these weeds are normally not present and when traveling through the pasture, the Goosefoot and Lambs Quarter were not observed anywhere other than the dried reservoir."

Ideally, feed or grazing pasture for livestock should contain less than 1,500 ppm of nitrate, said Van Emon. As the concentration of nitrate increases, more risk is associated with providing those feeds to livestock. Van Emon recommends keeping livestock away from feed that has nitrate concentrations over 10,000 ppm.

"The recommendation to the producer was to remove the cattle from the area of concern or fence off the reservoir to reduce the risk of cattle grazing the weeds," Schuldt said. "Nitrate concentrations at that level are concerning and nitrate toxicity symptoms and death can occur rapidly."

Symptoms of nitrate toxicity in livestock include labored breathing, muscle tremors, weakness and staggering gait. If these symptoms are observed, remove the nitrate-containing feed or move the livestock out of the pasture and contact a veterinarian for a treatment plan right away. When moving cattle from a high-nitrate feed area, move them slowly, as moving livestock too quickly can exacerbate the symptoms.