National Grilling Show To Be Taped During Watford City Ribfest 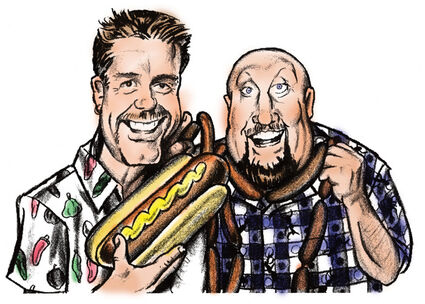 Come be a part of the taping of the Mad Dog and Merrill Midwest Grillin' Show on the street during Ribfest in Watford City on Aug. 13 at 12:30 p.m.

With their wacky blend of barbecuing, satire and wittiness on national and regional television, Mad Dog and Merrill have brought their comedy cooking performance to home and sport shows sprinkled around the nation, and now they'll be on Watford City's Main Street, grilling and entertaining for all!

Since 1983, these grilling gurus have enthusiastically delivered delicious recipes for a variety of food – all keeping with their motto: "If you can cook it, you can grill it!" Those who follow America's grilling artists know that it's never the same show twice, peppering their outdoor cooking show with a unique blend of satire and wittiness as they travel the country.

In Wisconsin, Mad Dog and Merrill are famed for conducting the tailgate parties for Green Bay Packers games. They have prepared about 8,000 bratwursts at 20º below zero!

In addition to their national television show, Mad Dog and Merrill boast several cookbooks, including The Grilling Buddies Cookbook, We've Got Gas and Forever Tailgating.

Want to get in on the action as part of their live studio audience? Come to North Main Street, Watford City, on Friday, Aug. 13 from 12:30-2 p.m.

Find out about Mad Dog and Merrill at maddogandmerrill.com.