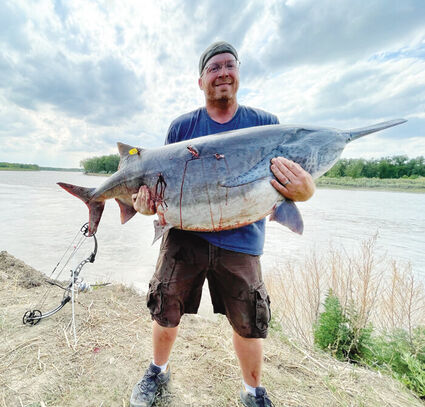 Steve Harris Jr., a Montana fisherman, has set a new world record for the largest paddlefish caught with a bow and arrow. (Photo submitted)

Steve Harris, Jr., a Montana fisherman, has set a new world record for the largest paddlefish caught with a bow and arrow. The paddlefish, tipping the scale at 92 lbs., was caught on the bank of Yellowstone River, Sidney, on June 8.

For the past 10 years he has been bowfishing; his friend, Justin Fisketjon, introduced him to the sport of bowfishing.

Harris said, "Justin is a really great bowfisherman; he brought me to a night tournament shooting carp, and we got 2nd place and I kinda got hooked on it from there."

The day he caught the world record, he was about to head out to Wisconsin for vacation. He said, "That day I knew the river was going to peak out and I knew I wouldn't get a chance when I got back so I headed out early with Justin."

The two usually film all of their fishing expeditions on camera so after setting up the camera gear and shooting his fifth shot he landed the world record. "The fish ran out about 20-30 yards - took out all the line on the reel before getting him back in and when I got it to the bank, I realized that I caught a really big one," explained Harris.

Fisketjon caught what was the holder of the world record before Harris so he thought that it just might be the next world record. The two and Harris's wife and son went to High Caliber Sports, Sidney, to a certified scale, and it weighed in at 92 lbs. He said, "I was pretty happy to see that scale hit 92 lbs."

When bowfishing, it is difficult to see exactly what you are going to hit because most of the body is covered up by the muddy water of the river.

"You can't be picky, haha! You just have to shoot as soon as you see one," chuckled Harris. 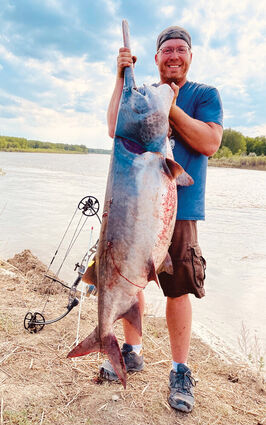 Harris has been fishing his whole life. His father would take him out fishing when he was little, and he has been fishing ever since. He said, "That is about all I do anymore - that and hunt." His favorite type of fish to catch is catfish but he fishes for just about anything.

Harris explained that any day is a good day if he catches a big fish. "If I sit on the river all day and only catch one big fish, then I'm happy."

His advice for someone wanting to go bowfishing is to keep at it and have a lot of patience. He said, "You have to have a good spot to do it and I am always willing to take someone out. Just find a spot and stare at the water for hours, have lots of patience, and you just might reel in a big one."