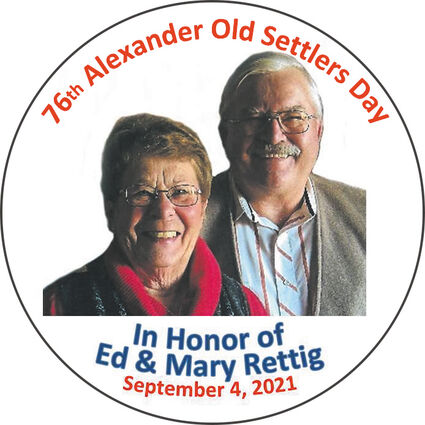 Growing up on a farm eight miles North of Alexander we always looked forward to Old Settlers Day. We attended Alexander Public School, graduating in 1970. Ed married his high school sweetheart, Mary, on April 29, 1972 while working at Missouri Valley Creamery.

In 1977 we moved to Alexander and that same year Alexander Farmers Grain and Oil offered Ed a job. The management position became available in 1979.

The next 10 years were full of peaks and valleys as farming and oil industries are. In 1988 we had the opportunity to purchase the Station and Bulk plant from Mon-Dak Framers Elevator Co. Mary and I along with Nevin Larsen purchased the station and bulk plant. The board was very fair in negotiations for the property knowing the effect the closing would have on our small community.

In 1999 Nevin decided to return to the oilfield, selling his interest to Mary and I. We operated R&L Oil for another 12 years.

We had decided if we were going to stay in business, we would need to expand our operation by installing a kitchen and providing food options, which would mean needing more staff and working longer hours.

After Ed's heart surgery in 2010 we realized that the restrictions of no more heavy lifting and no more tire changing made our decision to sell quite clear. In 2011 a business family from Washington State purchased R&L Oil.

In 2012 we tried retirement; however, we had lost touch with the community. Ed worked with a young carpenter for several years. During that time, we purchased the Rettig family farmstead and moved there in 2013.

We were very blessed and very proud of our four children; Ellie, Melissa, Travis and Amanda as well as our grandkids and great grandkids. We never have to worry about a place to go watch them perform.

We want to thank the Alexander community for the many years of supporting Mary and I as well as R&L Oil.

Mary and I now work at the Alexander Public School as class aides as well as part of the kitchen crew. This helps keep us involved with the school as well as the community.

We are thankful to be able to give something back to the community that supported us.

Lunch is on us!