Ball In The House, America's Got Talent Finalists, To Perform In Watford City Sept. 24 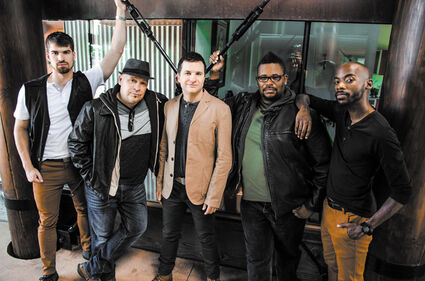 Ball In The House. (Photo submitted)

Watford City Area Concert Association is kicking off the 2021-22 concert series with one of the most popular forms of musical performance – A Cappella! BALL IN THE HOUSE will visit Watford City on Friday, Sept. 24 at 7 p.m. at Rough Rider Center Convention Hall. The Concert Association is offering this as a FREE kickoff concert to encourage people to come and learn what the concert series is all about.

Based in Boston, MA and having been in existence for over 20 years, Ball In The House is a highly sought after vocal band that performs over 200 concerts per year. Their special brand of music combines R&B, Soul and Pop that brings all ages to their shows. They have played theaters, performing arts centers, fairs, festivals, private parties. They have opened for such luminaries as The Beach Boys, The Jonas Brothers, The Temptations, Gladys Knight and Lionel Richie.

They have traveled the world over headlining both the 2016 & 2018 China International Chorus Festival. Also, in 2016, they won the Boston Harmony Sweepstakes and were voted APCA Band of the Year and Best of Boston for Outstanding Musical Performers. For six years Ball In The House were the voices behind all the Cool Whip commercials and recently wrote and performed the jingle for Amazon's Prime Day. They have also appeared on America's Got Talent, The Today Show and the Daily Buzz. Some of the favorite tunes that Ball In The House love to sing include: My Girl – The Temptations, Stayin Alive – The BeeGees, Signed Sealed Delivered – Stevie Wonder, Blank Space – Taylor Swift, Treasure – Bruno Mars, That's The Way – KC & The Sunshine Band, All Of Me – John Legend and many more including a gospel piece or two.

Ball in the House is the first concert of the 2021-22 season. A $50 individual membership to the Concert Association will grant you access to five additional concerts throughout the season, including the Comedy Café show on Oct. 1 at 7 p.m. at Watford City Performing Arts Center. Additional concerts include, the Veritas Ensemble on Oct. 16, Duo Baldo, Feb. 1, 2022, The Chipper Experience Comedy Show on Feb. 16, 2022 and Crocodile Rockin', An Elton John Tribute on April 23, 2022. Visit longxarts.com to learn more about the concert series. Memberships will also be available at the Ball in the House Concert.

Contact the Long X Arts Foundation for questions at longxarts.com, [email protected] or 701-770-8659.