Haugen Ranch Chosen As NDSA Rancher Of The Year 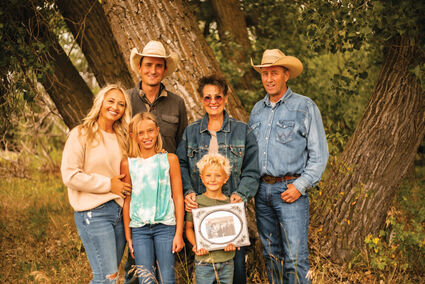 The North Dakota Stockmen's Association (NDSA) presented Haugen Ranch, Alexander, ND, with its Rancher of the Year award at a special awards banquet during its annual convention in Fargo, ND, on Sept. 25. Seventy-five-year NDSA members and ranch proprietors Les and Shelly, along with their son Lane and daughter-in-law Kristan, run the cow-calf operation in McKenzie County.

In 1912, Lars and Christine (Dahl) Haugen homesteaded Haugen Ranch 15 miles south of Alexander. They had made the voyage from Vang, Valdres, Norway, unwed at the time, and arrived at the port in Boston, MA, one month apart from each other. In November 1912, Lars filed for land in Bowline Township in northwestern North Dakota and he began living on the land shortly after. Lars and Christine were married March 17, 1915. They began their married life on an empty prairie with empty hands, ready to work. In 1916, the land was officially patented as their own.

"One-hundred-and-five years later, Haugen Ranch lives on," said Shelly, noting the family's centennial celebration, which took place in 2016. "It has been fun and honorable to see Lars and Christine's vision when they settled here mold into something they could only dream of. We keep building and we strive to be better each day."

Lars and Christine had three children, all born on the homestead. Their sons, Orville and Luther, were farmers and ranchers living south of Alexander and their daughter Inga became a nurse and moved to town.

Luther Haugen married Florence and, in 1946, they purchased the family's ranch and became NDSA members. In 1949, Luther relocated the ranch to its present location, two miles north of the original homestead. The homestead's outbuildings still function as usable facilities today.

Luther passed away at the age of 50 in 1972. Florence and their four children, Les, Judy, Laura and Kay, continued to live and work on the ranch after Luther's death. Florence retired in 1980 and, in 1981; Les and Shelly began purchasing the ranch from Florence and Les's sisters. Les and Shelly continued to expand the ranching and farming operations, growing and adding acreage with each generation. They made it a point with their three children, Callie, Lane and Tess, to instill the tight-knit, hardworking family values of the western heritage. Les and Shelly give a lot of credit to the success of the ranch to their children for their hard work and continued dedication to the operation.

Les and Shelly introduced Charolais cattle into the commercial herd. The cattle herd presently consists of black and black baldy cows and still uses Angus and Charolais genetics. They calve in April, wean in the fall and sell to repeat private buyers. In addition, they keep black replacement females when able.

The Haugen family also hosts a large branding each year. "We do it the traditional way - with a rope and drag," said Les. "Our neighbors come from all around. They play a vital part in our operation on branding day, and every other day of the year." The Haugens credit not only the family for good help, but the indispensable and strong neighbor relationship the community around them has. "We are family-oriented and neighbor-oriented," said Kristan. "Everyone around here helps each other and makes the world go round. It's truly special."

Today, Les, Shelly, Lane and Kristan operate Haugen Ranch and hold the Haugen Ranch's NDSA membership. They have been a member for many years because the NDSA has the best interest of North Dakota cattle producers in mind, Les said.

Before returning to the ranch full-time, Lane received a welding degree and worked in the oilfield, while staying active on the family's operation. Now, that education serves as a means for making the ranch more self-sufficient. "From being able to do the repairs that are necessary to raising our own feed and making our own hay, we prefer to be self-sufficient in every way possible," said Lane. "Everyone has a hand in the operation to do so, including our children, Henri and Ledger." The family also said, with self-sufficiency, comes the ability to be sustainable and push the ranch's goals to the next level. "We improve every day and strive to make things better," said Lane.

"Being a rancher is a proud way to live," said Les. "You make the best of your cattle, make a living and spend time with your family that is alongside you every day." The next generation agreed as Kristan noted, "We are able to set our own goals and be self-motivated. We take pride every day in what we do."

Les and Shelly look forward to seeing the next generation - their eight grandchildren, Hadley, Harley, Rio, River, Henri, Ledger, Tay and Rye - playing their own roles on the ranch and in life.