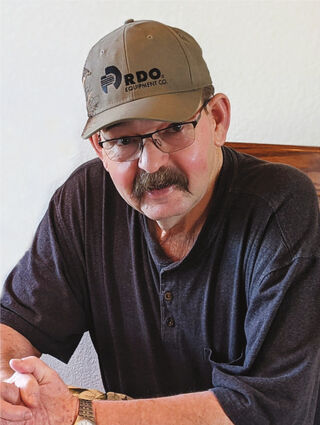 Funeral services for Gary Paulson, 69, Cartwright, ND, were held at 10 a.m. MDT, Thursday, Sept. 23, 2021, at Zion Lutheran Church, Fairview, MT with Pastor Tim O'Shields officiating. Interment with Military Honors provided by American Legion Post #114, Fairview and Montana Army Honor Guard was held at 2 p.m., CDT in Nameless Cemetery, Cartwright, ND under the care of Fulkerson-Stevenson Funeral Home, Sidney, MT. Visitation was 10 a.m.-6 p.m. MDT, Wednesday, Sept. 22, 2021, at the funeral home in Sidney and one hour before service at the church. In lieu of flowers the family request memorials to North Dakota Boys Ranch, or a charity of one's choice. Remembrances, condolences and pictures may be shared with the family at http://www.fulkersons.com.

Gary Martin Paulson was born Feb. 22, 1952 to Arthur C. and Elizabeth J. Paulson. Because he was born on our first president's birthday, Dad wanted to name him George Washington Paulson. Thankfully, Mom didn't think much of that idea. He was the 7th baby and 4th living son.

Gary attended school in Cartwright and Alexander before settling in at East Fairview School. He graduated from Fairview High School in 1970. After spending some time at MSU in Bozeman in Agri-Business classes, he enlisted in the US Army in 1972. Following Basic Training, he was deployed to the DMZ in Korea. He returned to Cartwright, where he farmed and raised pigs for several years. Gary worked heavy construction for RH Gifford, and then purchased Sidney Grain with partner, Brian Ler. After 20 years at the elevator, he went to work for McKenzie County Road Dept. as a grader operator, where he worked until he retired in 2020.

Gary was diagnosed with ALS (Lou Gehrig's Disease) in 2020. He died from complications of the disease on Sept. 18, 2021 – his mother's birthday.

Gary loved to fish and hunt in the great outdoors. He and Hunter especially enjoyed hunting upland birds, and he spent a lot of time on Yellowstone River and Lake Sakakawea, bringing home stringers full of walleye. Fishing was a favorite pastime of the Paulson kids growing up. We share many fond memories of early mornings on the shores of the Yellowstone and Charbonneau Creek.

Gary carried on his Dad's legacy as a loyal Minnesota Twins fan, and traveled to spring training games. He was also a die-hard Vikings fan. He was on a bowling league for many years, traveling to the big tournament in Las Vegas a couple of times. He also enjoyed being on a pool league team with friends in Fairview. He excelled at gardening, and often shared his bounty. He enjoyed his family, friends and life in Cartwright.

Gary was an easy-going guy who could sit down and visit with anyone. Everyone who knew him will remember his boisterous laugh. You always knew Gary was in the room when you heard it. He had a special relationship with his nieces and nephews and their kids, always giving out the best Halloween treats and enjoying snowball fights. All of them were very fond of him.

The same can be said for most people that knew Gary. Neighbors, classmates and co-workers were life-long friends.

He will be sorely missed.