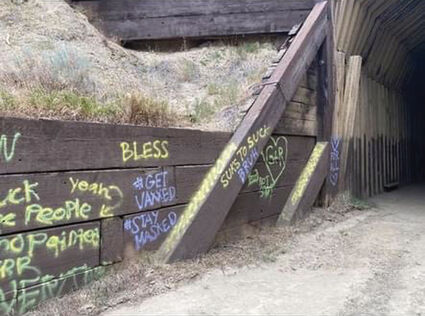 The Fairview Bridge and tunnel has been admired by locals for years. This treasured landmark has been defaced with graffiti and other acts of vandalism several times. McKenzie County Sheriff's Department has investigated a more recent act of graffiti and found individuals responsible for it.

The department is waiting on an appropriation restitution before any prosecutions.

"This was especially heinous because of the timing," said Ray Trumpower with The Friends of the Fairview Bridge committee.

Marty Shaide, a Fairview resident, painted over the graffiti on the bridge so that it could be included in the filming of the "End of the Rope" movie, which was taking place around the tunnel. Moments after it was freshly painted by Shaide, a couple of individuals went back to that spot and spray-painted words and signs across the painted structure.

"This vandalism got everyone's attention and there was a reward of $3,000 to catch the individuals who did it," added Trumpower. "We got a lead and at this point, they are proceeding to prosecution."

The Friends of the Fairview Bridge committee is now looking at investing in cameras to be placed around the bridge to catch anyone who may be responsible for future acts of vandalism.

The Fairview Chamber of Commerce is now awaiting bids for the cameras for the bridge and tunnel. 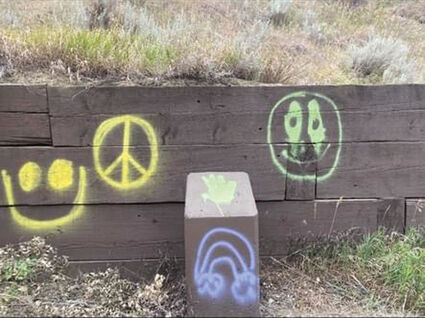 The landmark has seen a lot of vandalism over the years. Trumpower recalls, "A few ladies told us that they would like to see the bridge light up at night. They suggested that we should hang lights to light it up in the dark." The same day that the lights were hung, some individuals went and pulled them all down, destroying them.

In addition to this, over 100 feet of fencing has been torn off of the bridge, which made areas of the historic site unsafe for the public.

Trumpower is not surprised by the vandalism but wishes these individuals would use their time more wisely. He chuckled, "I usually have five things to get done on the weekend and I usually only get to three of them. There is so much to do around here, find something!"