"Fairview's Pastor" Receives Above & Beyond For Fairview Award 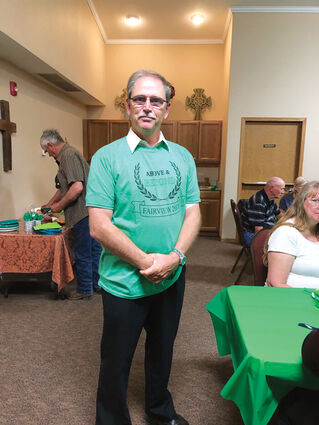 Pastor Kelly Sloan shows off his "Above and Beyond for Fairview" t-shirt.

Kelly Sloan has served as pastor of Fairview Alliance Church for 27 years, longer than any other pastor of any denomination in Fairview. Along the way, he has become known as Fairview's pastor with his engaging manner and obvious caring for all God's children, no matter their circumstances. One aspect Kelly enjoys is what he calls his post office ministry. "You have to get the mail and when you do, you talk to people," he explained. "It's one thing I love about a small town. You can walk or bike everywhere and when you talk to people, they talk back maybe providing an opportunity to welcome them into God's family."

After graduating from Canadian Bible College, Kelly and his wife, Lynn, were living in Regina, SK waiting and looking for guidance from above on whatever role they would play in the future, when they investigated an opportunity in Fairview. They arrived in Fairview in late December 1993, in a snowstorm and Kelly preached his first sermon Jan. 2, 1994. The couple planned to only stay for two or three years and then maybe do some missionary work depending on where God led them. To the benefit of the community, they stayed because the people treated them really well and "because there was always more to do." "The people were huge supporters of us. They were down home and right to business." The kindness and integrity of the church family caught their attention. "God has a way of breaking stereotypes like the idea that people in small towns are not educated or modern. The church board was wonderful to work with," Kelly said. "We were super green and they put up with us," Lynn added.

"We're sort of on our third congregation now since we started," Kelly said. At the retirement celebration held Sunday, Sept. 26, Sloans were delighted to see people who attended back in the '90s, come from several states to reminisce and say farewell to their pastor.

Pastor Sloan made lasting connections with both Fairview Schools, announcing basketball and volleyball games for ten years, manning the clock and scoreboard for football and refereeing junior high and elementary basketball. He was also the first coach of the high school golf team, which produced two state champions, and he started the junior high golf program. He also coached city league baseball with the younger kids and Babe Ruth for two years. Following his sons, he also coached city league soccer in Sidney for a time. He calls his frequent substitute teaching at both schools fun work, with his stories of engaging the students both funny and inspiring. Kelly is also an avid photographer who has won several awards including Best Picture at the Richland County Fair. He mentioned going deer hunting early in the morning and ending up shooting a glorious sunrise rather than game.

Kelly calls the Fairview Ministerial Association, of which he has been chairman since six months after he arrived, remarkable. "Where else do you see an Alliance, a Presbyterian, two Lutheran and a Catholic Church getting together to do good things in the community?" he asked. The group hosts Baccalaureate each spring and Fairview Festival Sunday in the Park. It also coordinates the noon meal at Festival with each church taking its turn serving. They have often hosted Thanksgiving services as well.

Lynn Sloan declares herself a professional volunteer. She plays piano for services, leads ladies' bible study and has been Sunday School administrator. Both she and Kelly have served on the Red Cross Disaster Action Team. Her passion for many, many years has been Mercy Market, selling products made by women overseas who are trying to escape poverty or exploitation. "For most, it's their only source of income. It means they can stay home with their families instead of going to the city and finding who knows what," Lynn explained.

Lynn calls the Blessings Sale held during the Community Garage Sale, her baby. The sale has raised thousands of dollars for various ministries including 4HerND, which aided women involved in prostitution and victims of human trafficking. It paved the way for the Sloan family to travel to Africa, bringing with them massive amounts of goods to give to needy families. While there, Kelly conducted a basketball camp with Duncan while Lynn took Spencer to help with English classes. "All the causes are good causes, whether local or overseas," Lynn said.

With the diagnosis of early onset Alzheimer's forcing his retirement, Kelly reflected back on his time in Fairview. "Everybody in a small town has a tool and a skill and they've been so willing to share those with us," he said. "Everybody in the community, especially the church, has breathed life and faith into us."

Future plans are under prayer at this time with a move to Billings likely. While Sloans' older son Duncan is settled in Steinbach, Manitoba, their younger son Spencer is still living at home and attending college at Williston State. In the meantime, Kelly will continue to preach for a while at Community Presbyterian Church where he has conducted services since 2017.

The Fairview Chamber of Commerce salutes Pastor Sloan and along with the entire community, wishes him and his family all the best wherever the future takes them.