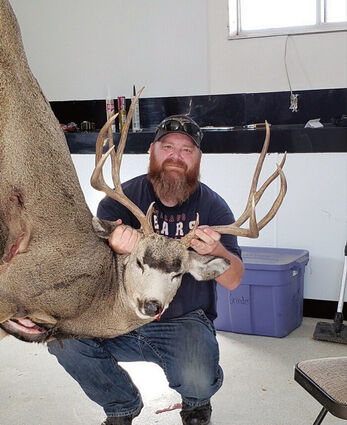 Derek Schieffer with his mule deer from 2019. (Submitted photo)

Derek and Waylon Schieffer, Sidney, have shared a passion for hunting for several years. Derek began hunting at a young age with his father; he recalls his father, Robert, taking him hunting before he was even old enough to hunt.

"When I turned 12, he took me hunting and I shot an antelope and missed my deer and then he passed away, so I had to wait until I got my driver's license to hunt again," added Derek.

He has been hunting every year since then and now shares his passion for hunting with his son, Waylon, taking him hunting every chance he gets.

Derek says ever since his son was born, he was eager to take him hunting; at the age of 2 weeks old, he brought him on a hunt. "Of course, he didn't leave his little car seat, he stayed in the truck with his mother; he has been hunting with me ever since," chuckled Derek.

Derek made sure to get Waylon involved in hunting as early as he could, enrolling him into the Montana Apprentice Hunter Program, where he learned about hunter safety and hunting. The "Apprentice Hunter" law allows anyone 10 years of age or older to hunt two license years without completing hunter education.

After Waylon completed the program, he started target practicing, preparing for his first deer.

"I took him out to some hunting land before dark, and as soon as the sun came up, there was a deer right in the field in front of us where we camped out. When the deer came, he started shaking and he looked at me and said, 'Buck fever is real!' He made a great shot on his first buck ever and it was on his 10th birthday," said Derek.

The next year they both went hunting again and Waylon shot another buck. "He has had two bucks down before he was even 11 years old and if he shoots one the beginning of this year, he will have 3 bucks shot before he is 12," noted Derek. 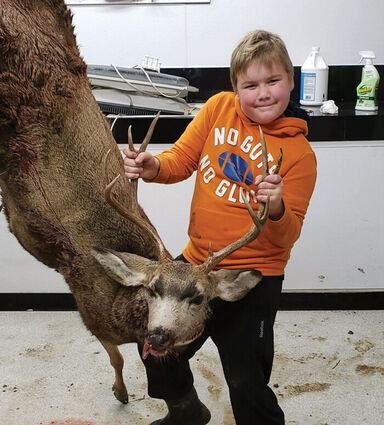 Waylon Schieffer with his mule deer from 2020. (Submitted photo)

This year, Waylon drew an elk tag for Fort Peck. This will be their first elk hunt together. Derek says it will be all about father and son bonding and not so much about the elk.

"I'm just excited to get him out of school again and take him out for 5 days and show him what it is all about."

Derek explained that he would be hunting with his son, even if he was not able to take anything home. "We do hunt for meat, but we would go even if you were not allowed to keep it. It is just fun to go out there and see the wildlife."

He said he wants to keep up the family tradition of hunting. "I went with my dad and made a lot of memories. Now I get to do the same with my son, that is what it is all about, having fun and spending time with family."