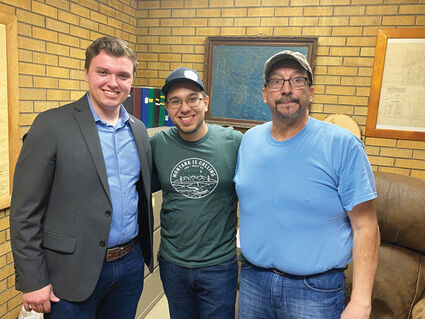 Montana's Young Republicans chairman, Dennison Rivera and treasurer, Alden Tonkay visited Richland County to speak to young people and encourage them to get involved in civics.

"It is really important for young people to be involved because when you look at the legislature there are a lot of gray heads and they will have to be replaced soon," stated Jordan Hall Central Committee State Committeeman.

Rivera and Tonkay visited classrooms in Sidney and met with Commissioners Mitchell and Young, Mayor Norby, Clerk and Recorder Stephanie Verhasselt. They were both able to see the eastern side of Montana and speak with several people about issues relevant to the area.

Montana Young Republicans is a group of conservatively minded individuals who advocate for conservative principles, make a difference in the community, and participate in local government.

"My favorite thing through this group is talking to young people and encouraging them to get involved and give them information they have never heard before," stated Rivera.

Hall said, "Dennis Rivera exemplifies inclusivity not because of his ethnicity but because of his age, former nationality, and because he's from the western part of the state. He is here primarily to help us with that mission of building an inclusive growing party and to make sure that young people are included in what the GOP is trying to accomplish."

He said, "These guys are responsible for recruiting young people involved in civics. It is important that they hear from the eastern side of the state because what happens in Helena affects us in the rest of the state."

The Richland County Republican Central Committee is dutifully dedicated to building a larger, more inclusive party among those who share Montanan ideas and values.