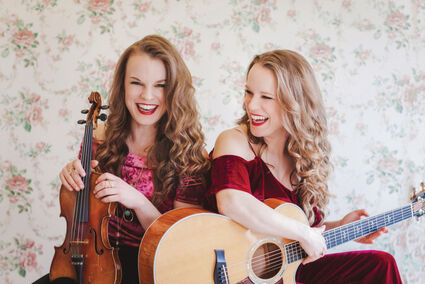 Twin Kennedy's family-friendly show has been a hit across North America. Now based in Nashville, TN, the duo crisscrosses the continent multiple times a year, receiving standing ovations everywhere they go.

With years of classical training, including their Bachelor's Degrees in Music Performance from the University of Victoria, the sisters have found their home in country music. With Carli on vocals and guitar, and Julie on vocals and fiddle, these petite powerhouses will fill your soul with joy and warmth through their seamless harmonies and heartfelt songwriting.

This magical blend has been recognized internationally and they have also received three Canadian Country Music Award nominations, including Interactive Artist of the Year and two nominations for Fiddle Player of the Year (Julie), and their music has been featured in Rolling Stone Magazine, Billboard and CMT. To top it all off, the twins were recently named Distinguished Alumni by the University of Victoria. "Wise Woman", the duo's new single, is currently spinning on Sirius XM CBC Country.