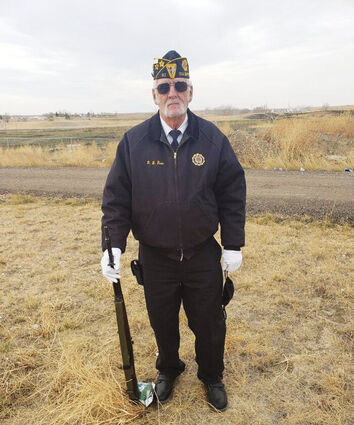 David Freeman Dean, 79, Culbertson, MT, was born in Jackson, MI on Nov. 16, 1941. It was there where he met Barbara Boverhof at Todoroff's diner when he would come in towards the end of her shift at 2 a.m. for his dinner break from the post office. They became good friends due to David's great sense of humor and later started dating. They married April 7, 1965.

Together David and Barbara made their way to Montana eventually settling in Culbertson where they raised their daughter, Shasta. His family was completed by the birth of his granddaughter and grandson. David's world revolved around his grandchildren. He attended almost every activity and event they were involved in, even catching one last football game before he became ill. We will miss him showing up an hour early with arms full of his homemade jerky or monster cookies.

David served as a medic in the United States Navy and later became involved in the American Legion. He proudly put together many blue-ribbon fair booths and was commander of Thomas Mann Post 81 at the time of his passing.

David passed away Nov. 6, 2021 with his wife and daughter by his side.

David is survived by his wife, Barbara, and daughter Shasta, her husband and children. He is also survived by his sisters-in-law, Karen (Ron) Rahlf, Valerie Schovanec, Audrey Watts, and Cindy (Ed) Everson; countless nieces and nephews; and numerous other relatives.

We have been told by many people that we will never know how much David has done for them or their family, it truly warms our hearts and we thank you for sharing.

Please join us for David's memorial service 11 a.m., Friday, Nov. 19, 2021 at the Legion Hall, Culbertson, MT. Lunch will be served following the service.