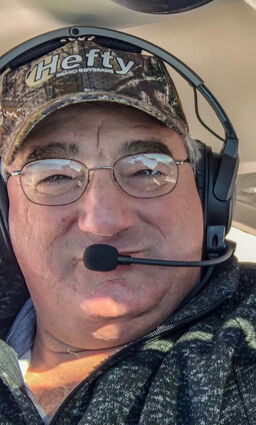 Memorial services for Barry K. Holzworth, 58 of Sidney will be at 10:00 A.M., Friday, December 17, 2021, at the Shepherd of the Valley Lutheran Church, Sidney with Pastor David Huskamp officiating. Fulkerson-Stevenson Funeral Home is caring for the family. Remembrances, condolences and pictures may be shared with the family at http://www.fulkersons.com.

Barry Holzworth, 58, of Sidney, MT passed away on Friday, December 3, 2021, with his loving family by his side in Billings, Montana. Barry was born on October 13, 1963 in Clarion, Iowa to Paul and Marguerite Holzworth. As a child, he was interested in cars, tractors, planes and anything mechanical. He loved spending time in Montana at his uncle's farm.

Barry was a 1982 graduate of West High School in Davenport (IA). After high school, he worked in the wheat harvests and oil fields of Montana and Wyoming before enrolling in the flight program at The University of North Dakota.

Barry was a true aviator, in love with the art of flying. A pilot for over 40 years, Barry was well known to the aviation community and taught many the gift of flight. Barry owned Sidney Air Service and served as an aerial crop spray applicator for nearly 10 years. He flew several years as a commercial pilot for Big Sky Airlines. In addition he was the co-owner of, and agronomist, for the Hefty Seed Company, providing chemical services for farmers in the Sidney area.

Barry loved his family and the bright light in his world was his daughter Hailey. He lived for the moments he could spend time with her, and loved their flying adventures together.

A celebration of life for Barry will be held in the spring of 2022 in Montana. Dates and details for this event and others will be announced as available.

In lieu of flowers, donations for his daughter Hailey's educational/aviation fund can be made at https://everloved.com/life-of/barry-holzworth/