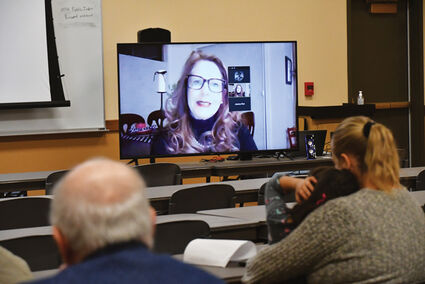 In early Dec. superintendents from all eight of Montana's Class AA public schools penned a letter of no confidence in the Office of Public Instruction, Elsie Arntzen. Days later Parental rights advocates, 21 Republican lawmakers and 500 citizens sent a rebuttal letter in support of Arntzen.

Arntzen spoke of her willingness to work with all school administrators to iron out their differences. She was dismayed that the letter from the AA superintendents was released to the media before reaching out to her directly. "I firmly believe in a relationship," Arntzen said. "I believe in communication. All of those superintendents have my cell number." She stated that she will be holding a meeting directly with the AA caucus in Jan.

Arntzen also stressed her belief in local control of school policies. "I believe we need to trust our trustees. We need the opportunity to discuss those school board policies. And if those policies do inhibit learning, lets review them," she stated.

The next topic Arntzen discussed was CRT. Critical Race Theory is an academic concept with the core idea that race is a social construct and that racism is embedded in legal systems and public policies not just individual bias or prejudice.

On May 27 Knudsen issued a binding opinion on CRT. The Binding Opinion stated that schools, other governmental entities, and employers may not treat individuals differently on the basis of race. Another point the opinion makes is that Many CRT activities violate U.S. and State Constitutions, federal civil rights laws, and/or Montana Human Rights Act. Attorney General's Opinions carry the weight of law in Montana. More information on the Attorney General's binding opinion can be found at https://dojmt.gov/attorney-general-knudsen-issues-binding-opinion-on-critical-race-theory.