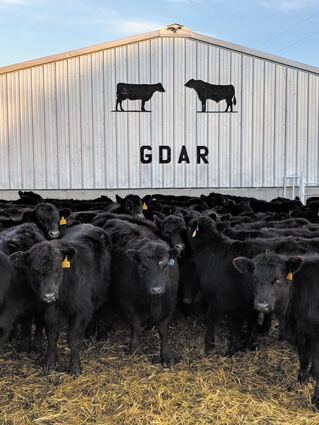 Gartner-Denowh Angus Ranch (GDAR) is located just on the outskirts of Sidney, a close-knit family run ranch that focuses on raising efficient and functional cattle bred for the commercial cattle operation. GDAR began in 1957 when Joe Gartner and Russell Denowh bought 20 head of registered Angus cows from a dispersion sale in Montana. In 1974, Russ and his son, Micky, bought out Joe Gartner but kept the corporate name. At this time, they were calving about 150 cows and selling around 60 bulls per year. Russell's other son, Paul, joined the operation in 1984.

Micky, Paul, Casey and Chad Denowh all run the ranch together along with their families. GDAR is proud to be a family run operation. Chad and Jennifer's children make the 6th generation to live and work at the ranch headquarters. Lots of technological advances have been incorporated into the operation over the years including performance testing, carcass testing, artificial insemination, embryo transfer, and DNA testing, but the core principle of raising functional and profitable Angus cows remains the same.

GDAR operates mainly on grazing land, but they also have some farmland on which they raise feed. GDAR's cows are fed a low cost and low energy diet to weed out any inefficient cows, which means cows that can't function on a low input system in their environment are culled from the herd. A majority of GDAR's bulls go to commercial operations in a similar environment to their own, and their goal is to make sure their bulls surpass their expectations.

Gartner-Denowh Angus Ranch has been family run for over 60 years, and they are proud of the business and cattle they have established in the community. Learn more about GDAR on their website at http://www.gdar-angus.com or stop by and visit anytime.