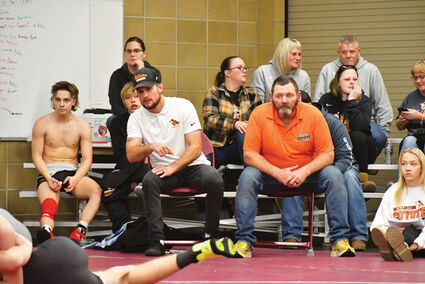 Gresh Jones (white shirt) coaches a Williston wrestler at the Eagle Invitational in Sidney on Dec. 3.

Williston High School wrestling is well on its way to success, thanks to the team's new Head Wrestling Coach, Gresh Jones.

Originally from Sidney, Jones has been involved with wrestling for as long as he can remember. His parents, Darold and Kari Jones, got him started in the sport at just five years old.

"I just loved wrestling from the start, always did and it was something that I always looked forward to after school," said Jones.

Throughout his 7th and 8th grade years, he would help Guy Melby during practice and anxiously waited to get into high school so he could compete at that level.

Once Jones got into high school, he won wrestling match after wrestling match. He was a four-time state champion and ended up winning over 180 matches and only losing five times.

"When I got to high school I drew a pretty good relationship with Guy Melby right away, he kind of took me under his wing and I knew right away that this is what I wanted to end up being, a wrestling coach," he said. "The Sidney program helped me out so much – It is definitely a wrestling town, and they love their wrestling and they taught me a lot of really good things. Now that I'm a head coach, I teach my kids those things too."

Jones continued wrestling throughout college. He went on to wrestle for the University of Minnesota for two years.

He then transferred to Dickinson State University where he wrestled for the last three years of his eligibility, with 79 wins and only 19 losses. During that time, he also became a two-time All-American.

In late May, Jones accepted a position as the Williston High School PE Teacher and head wrestling coach.

Ever since he can remember, he has always wanted to coach. Jones says he has had a lot of great mentors that have helped him along his wrestling career, and he hopes that he can help inspire his students to continue to excel.

He explained that the kids are excited to learn from him. "They get so excited when they see my name on the walls in Sidney or Williston and they hear about what I did in high school and college wrestling and they're excited about having the chance to learn and for me to teach them the skills that got me to where I am today."

Jones says the things he loves most about wrestling is the battle and accountability. "It is just a one-on-one situation the entire time. If you have a bad day, it is all on you, there is nobody you can blame, it is strictly on you." He said, "It is such an intense sport, I love coaching, and I don't know if I love coaching or competing more."

This past weekend, the team competed at the Rotary Competition, where they took 15th as a team, had 6 placers for the boys, 3 placers for the girls, and one of the girls won the tournament. 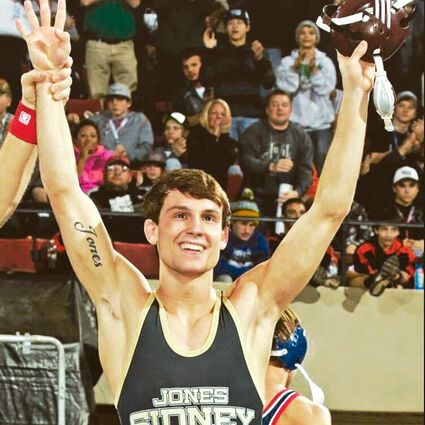 "I am happy to see that we ranked higher than last season. It was so cool coaching against Melby and guys that I used to be on a team with. Kids that I have taught, when I was in Sidney, are seniors in high school now and it is so neat seeing them compete," explained Jones.

One important aspect of his coaching is setting goals and achieving them.

"We have team goals, we would like to make it to the top 3 at state and we have already beat teams we have not beat in a long time," he said.

Jones makes each team member write out their goals and he posts them in their lockers so when they open their lockers, they see them every day and it motivates them to work towards their goals.

"I want to make sure each wrestler gets progressively better in every area, and I can't wait to see the continued growth of the team."