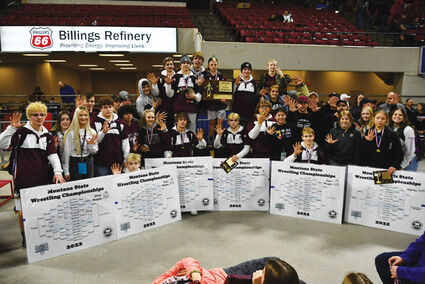 The Sidney/Fairview wrestling team poses for a photo after receiving the first place trophy. The Eagles have won five state titles in a row.

The Sidney/Fairview wrestling team has capped off their 2021-22 season with a fifth consecutive state title at the Montana State Wrestling tournament last weekend. The Eagles scored an impressive 201.5 points with Havre in second with 147.5 points. Custer County (Miles City) took third with 142 points and Laurel placed fourth with 141.5 points. Top ranked Frenchtown finished fifth with 140 points.

The Sidney/Fairview girls tied Ronan for tenth place. Both Keela Kary (120#) and Amaiya Kirn (126#) made it to the championship. Kary placed second and Kirn won her second consecutive first place finish.

Aden Graves is the third wrestler from Sidney to place first at the Montana State Wrestling Tournament four years in a row. He will now join the ranks of wrestling standouts Jessie Obergfell and Gresh Jones as Sidney's four timers.

It hasn't always been easy for the team this year. Three weeks ago they suffered a loss to Frenchtown during the Montana Class A Duals in Lewistown. "It really opened our eyes up. We changed some things and really turned the throttle up and got after it," Coach Guy Melby said. "Our kids responded so well. We could just feel it. During our practices you could hear a dime drop." The team was focused and working hard to prepare for the state tournament. "We beat a lot of guys that beat us earlier," Melby continued.

Coach Guy Melby was confident going into the second day. "I plotted it out that first night and we are going to win this thing by 50," he said. "We came out in the semifinals and we were on fire." The Eagles had eight wrestlers win in the quarterfinals. Six of those wrestlers won in the semifinals to advance to the championship. Sidney/Fairview had five pins in the quarterfinals and five pins in the semifinals. "That's a lot of points. You don't come back from that," stated Melby. The team had nine wins and two losses in the metal rounds for both the girls and boys.

"It feels really good to get back into the Metra and that atmosphere," Melby said. Last year's Class A State tournament was held in Miles City due to Covid. It was exciting but not as exciting as having 15,000 people screaming out loud." 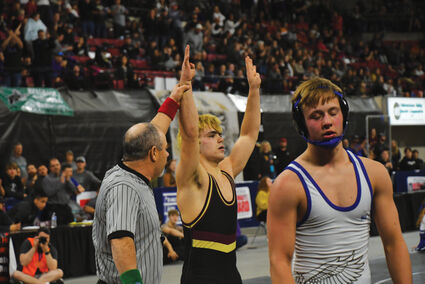