Decreased wheat midge populations in 2020-2021 are probably due to drought. 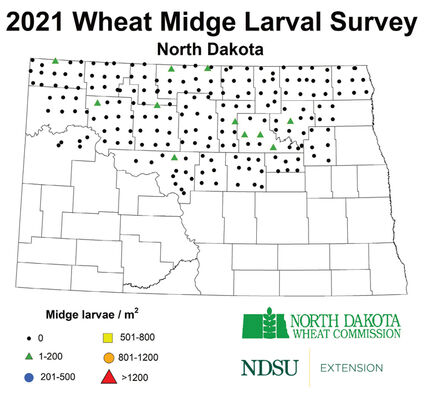 A total of 2,070 soil samples were collected from 22 counties in the fall of 2021 to estimate the statewide risk for wheat midge in the 2022 wheat-growing season. The distribution of wheat midge is based on unparasitized cocoons found in the soil samples.

"No soil samples had moderate or high cocoon densities of wheat midge (201 to over 800 midge larvae per square meter)," says Knodel.

"This dramatic decrease in wheat midge populations since 2019 is probably due to drought in 2020 and 2021," adds Knodel. "Drought can cause wheat midge to overwinter for two years instead of the typical emergence during the following season. Larvae also are susceptible to dryness and require rain to emerge from the soil in late June through mid-July, and to drop out of the mature wheat heads and dig into the soil to overwinter as cocoons. Comparing precipitation from May through August with wheat midge cocoon densities for each surveyed county over the past 11 years shows a strong positive correlation between precipitation and wheat midge populations."

With the very low populations of wheat midge for two years in a row, producers may not have to scout for adult midges this year unless the field is continuous wheat, and/or favorable moist weather in late June to early July occurs during emergence. These two factors can cause rapid increases in the numbers of emerging adult wheat midges, especially in areas that did receive adequate precipitation last year.

Knodel recommends that producers still use the wheat midge degree-day model to predict the emergence of wheat midge and to determine when to scout, and if their wheat crop is at risk. 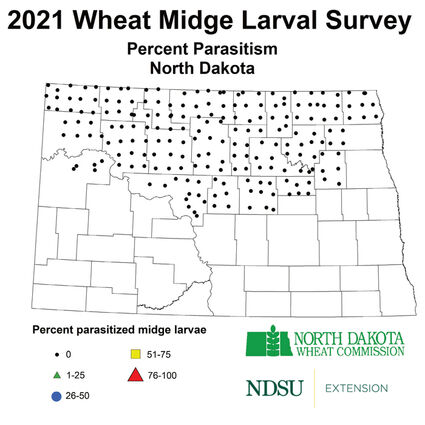 "This forecast is good news for growers since the risk for yield loss and reduced grain quality from wheat midge is low," says Knodel. "Unfortunately, the bad news is that the beneficial parasitic wasp can't survive without its host, wheat midge. To my surprise, no parasitized cocoons were found in 2021. This is the first time that no parasitic wasps were observed."