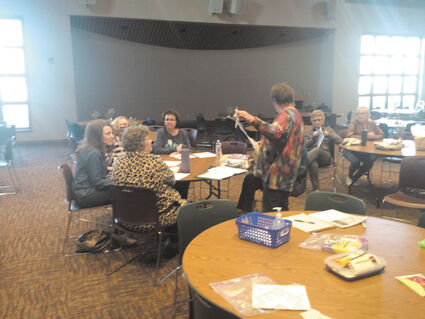 Lucy Lovec and Marilyn Halvorson lead it in Pella Lutheran Church's dining room. Eight different ladies from around the community joined them. They were each provided with a kit complete with all the materials they would need for the class except a pair of sharp-pointed scissors thanks to the Sons of Norway. This was the first class in which the attendees were introduced to and practiced the technique. They also chose a project to do throughout the rest of the class. Those who missed the first class but are interested in joining can still come to any of the classes.

Hardanger is a traditional Norwegian embroidery technique used to embellish existing fabric. It involves not only embroidery but also cutwork areas supported with a weaving technique between pulled threads in some designs. Hardanger also requires a different type of thread and needle than the usual techniques thought of as embroidery. Lovec learned from a class that was held by a business called Linen Ladies, a store that had been in Sidney in the late '80's-'90's.

Lovec and Halvorson plan to have this class for at least six weeks but may go on longer to ensure their students can master the techniques they are to learn. They do not think there will be enough interest for the class to be a yearly occurrence but the group might meet on their own for support and advice with future projects. Pella Lutheran Church is located at 418 W. Main St, Sidney.