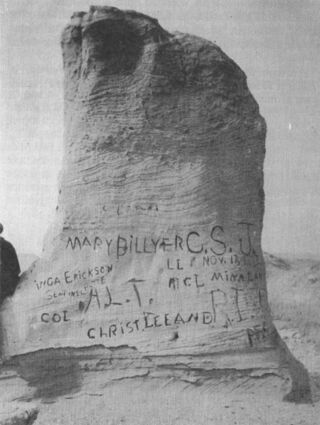 Rock formation where Squaw Gap area received its name. To settlers the formation depicted a Native American woman carrying her baby on its back. (Photo found in the Bi-Centennial Edition Courage Enough MonDak Families Histories 1974)

Secretary of the Interior Deb Haaland has formally established a process to review and replace derogatory names of the nation's geographic features. She also declared "squaw" to be a derogatory term and ordered the Board on Geographic Names – the federal body tasked with naming geographic places – to implement procedures to remove the term from federal usage.

"Racist terms have no place in our vernacular or on our federal lands. Our nation's lands and waters should be places to celebrate the outdoors and our shared cultural heritage – not to perpetuate the legacies of oppression," said Secretary Haaland. "These actions will accelerate an important process to reconcile derogatory place names and mark a significant step in honoring the ancestors who have stewarded our lands since time immemorial."

Secretarial Order 3404 formally identifies the term "squaw" as derogatory and creates a federal task force to find replacement names for geographic features on federal lands bearing the term. The term has historically been used as an offensive ethnic, racial, and sexist slur, particularly for Indigenous women. There are currently more than 650 federal land units that contain the term, according to a database maintained by the Board on Geographic Names.

The newly created Derogatory Geographic Names Task Force will include representatives from federal land management agencies, as well as diversity, equity, and inclusion experts from the Department. The Order requires that the task force engage in Tribal consultation and consider public feedback on proposed name changes.

Additionally, Secretarial Order 3405 creates a Federal Advisory Committee to broadly solicit, review, and recommend changes to other derogatory geographic and federal land unit names. The Advisory Committee on Reconciliation in Place Names will include representation from Indian Tribes, Tribal and Native Hawaiian organizations, civil rights, anthropology, and history experts, and members of the general public. It will establish a process to solicit and assist with proposals to the Secretary to change derogatory names, and will include engagement with Tribes, state and local governments, and the public.

Together, the Secretarial Orders will accelerate the process by which derogatory names are identified and replaced. Currently, the Board on Geographic Names is structured, by design, to act on a case-by-case basis through a process that puts the onus on the proponents to identify the offensive name and to suggest a replacement. The process to secure review and approvals can be lengthy, often taking years to complete a name change. Currently, there are hundreds of name changes pending before the Board. The newly established Federal Advisory Committee will facilitate a proactive and systematic development and review of these proposals, in consultation with local community representatives.

The Board on Geographic Names – originally established by Executive Order in 1890 – is a federal body designed to maintain uniform geographic name usage throughout the federal government. It is comprised of representatives from federal agencies concerned with geographic information, population, ecology, and management of public lands. In 1947, the Secretary of the Interior was given joint authority with the Board on Geographic Names and has final approval or review of its actions.

Several states have passed legislation prohibiting the use of the word "squaw" in place names, including Montana, Oregon, Maine, and Minnesota. There is also legislation pending in both chambers of Congress to address derogatory names on geographic features on public land units.

The McKenzie County Auditor/Treasurer Erica Johnsrud received a surprise email from the U.S.Department of Interior on Thursday, March 10 asking for submissions of five listed new names for Squaw Gap and Squaw Creek. Of 650 of these lands, 6 are located in North Dakota.

The McKenzie County Commissioners held a meeting on Tuesday to address the email and attempted to quickly notify as many residents as possible. According to Commissioner Craig Hystad, Arnegard, "These names, to my knowledge, don't coincide with anything in the area. Who knows where Morman Butte is?'

"The name for Squaw Gap originated from a large shaped rock resembling an Native Indian woman with her baby on her back"says Luella Leland, who lives in the Squaw Gap community.

"The notification received by the U.S. Forest Service, Watford City from the U.S. Department of Interior, Board of Geographic Names," says Lucas Graf, District Ranger." Any name that has squaw in the name has been determined derogatory."