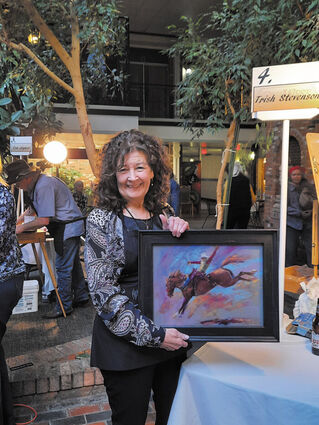 Stevenson presents one of her pieces (photo by Afton Ray-Rossol).

Trish Stevenson, Sidney, was recently honored to have her painting, "Regal Bovine" chosen for the cover of Portfolio Magazine, the official guide to Western Art Week. Western Art Week also includes the March in Montana Auction. A Western design show, Native American show and several other shows, are a major attraction in Great Falls every year.

Every year artists are asked to provide a few images to be used in advertising for the "Out West Art Show". The magazine chooses from those images. Stevenson is a part of the show every year during Western Art Week in Great Falls. "Western Art Week began as a celebration of Charles M. Russell's birthday and as a fundraiser for the C.M. Russell Museum. The auction is an internationally known western art auction and now sells millions of dollars with of art," she says. 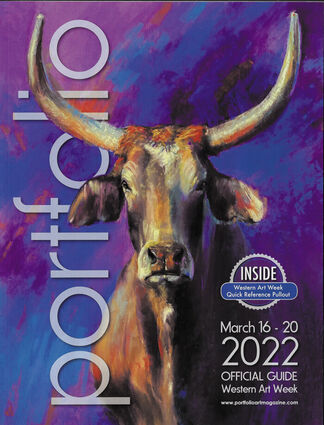 "Regal Bovine" by Stevenson is a 24"x16" pastel on sanded paper.

Stevenson grew up in the Denver area and credits her grandfather for the western flavor of her work. She moved to Sidney in 1992.

"Regal Bovine" exhibits strength, determination and a battle of wills, which are integral aspects of Stevensons art. " This particular bovine expressed such a regal bearing, such a quiet dignity demanding respect with its impressive "crown" of horns, that I knew I had to capture its personality in paint," she adds. She chose pastels for their immediate and expressive nature. "The blues and purples represent royalty with the dashes of red for confidence," she notes.

To view some of Stevensons art work visit http://www.trishstevenson.com.