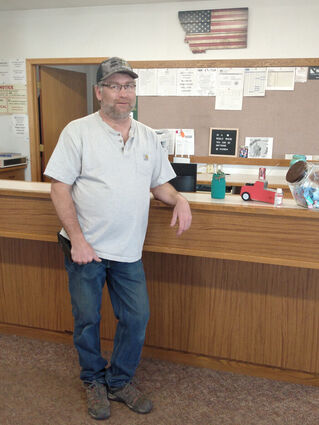 Mike Anderson is the new owner of Amunrud's in Sidney. (Photo by Jaymi Mozeak)

For over 50 years, Amunrud's has been a family-owned and operated RV Sales business on Highway 16, south of Sidney. Now, it is a part of the Anderson family life.

Tyler Amunrud retired in 2022 and instead of passing it on to his children, as his parents had done, Tyler sold the business. Luckily, the right person had been right in front of him for 28 years. Mike Anderson started working for Tyler in 1994 and it is all he has ever known. For Anderson, the opportunity arose and he took it. Amunrud's was his Jan. 1, 2022. He said, "Sidney can't afford to lose any more businesses."

Amunrud's has been a constant in Sidney's landscape since 1969 when Ron Amunrud's enterprising wife, Janet, convinced her husband to order two campers and sell one to help pay for the other. They passed it on to their son, Tyler.

Anderson intends to not change much. He does not intend to change the name. He wants to continue in the Amunrud's business model and make it a family business. For now, business is slow as it is the "off" season but he expects business to take off once late spring and summer hits. Then he his wife, and daughter can take pride in the products they sell and stand by the service work they perform for years to come.