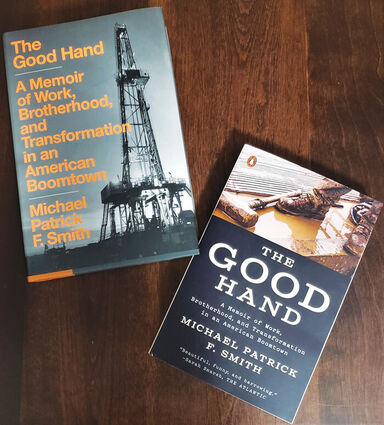 Michael Patrick F. Smith will be at Books on Broadway, Williston, Saturday, April 23 from 1-4 p.m. CST to sign his book "The Good Hand". There will be paperback and hardcover copies of his book available for signing. If you would like to reserve a copy of this book check with the store, online, or call 701-572-1433.

Like thousands of restless men left unmoored in the wake of the 2008 economic crash, Michael Patrick Smith arrived in the fracking boomtown of Williston, ND. Five years later homeless, unemployed, and desperate for a job. Renting a mattress on a dirty flophouse floor, he slept boot to beard with migrant men who came from all across America and as far away as Jamaica, Africa and the Philippines. They ate together, drank together, argued like crows and searched for jobs they couldn't get back home. Smith's goal was to find the hardest work he could do–to find out if he could do it. He hired on in the oil patch where he toiled 14-hour shifts from summer's 100 degree dog days to deep into winter's bracing whiteouts, all the while wrestling with the demons of a turbulent past, his broken relationships with women, and the haunted memories of a family riven by violence.