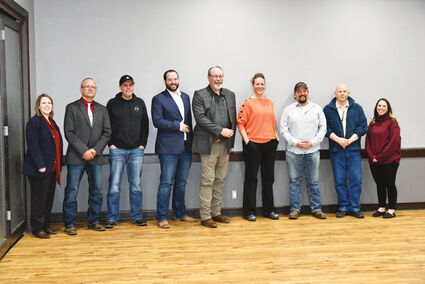 Over 40 citizens of Richland County crowded into the Sidney Elks Lodge for the 4th Candidate Roundtable on April 21. Nine candidates running for public office in the Richland County primary election went from table to table, speed dating the people in a way.

Stephanie Verhasselt and Amy Metz both came and figured since their offices were close they would make the rounds together. Verhasselt is running for reelection as Richland County Clerk and Recorder and Metz is running for her first term as Richland County Treasurer. They are both uncontested. When asked about big changes they had seen in their offices, Metz said she has noticed more applications for oil field activity and that she thinks something big may be coming because of that. When asked what they thought about all mail-in ballots, Verhasselt said it cannot be done in the Federal elections because of state law but she does not think it would cause too much of a problem in Richland County because we already have so many absentee ballots. Both said their office is well staffed but the county is in drastic need of election judges.

John Dynneson is running for reelection as Richland County Sheriff. After being a jailor, sheriff deputy, and 25 years as a police lieutenant with the Sidney Police Department, he had retired before deciding to run for sheriff. When asked where he sees Richland County going now that the oil boom has gone. He said he has seen the ups and downs that come with the booms. When oil activity is at its height so is the crime and his department has to deal with a lot moredangerous situations than at the low points. They have to change their tactics and, as a result, lose some of their connections to the community. Between booms, they have to become more community-oriented. He said, "I want my people to be approachable by the community people that are from here and want to be here, and I hope we make you feel safe that way." When asked about hiring more officers and having more of a presence throughout the county, he mentioned that the current officers are on-call 24 hours a day and that it didn't use to be that way. He said they might not get places as fast as the police in Sidney city limits but that is because they have over 1200 square miles to patrol. He was asked what his office was doing about drugs in the schools and he said that the Richland County Health Department handles drug education in the schools. He said the sheriff's department would be happy to help if they were needed.

Shane Kihl is running for his first elected office as sheriff. He states that he has over 20 years of leadership and management experience working in the oil and gas industry. He was asked why he had not become a law enforcement officer before running and he said because he works in the oil and gas industry and is now financially secure. He felt coming in at this position, as an outsider to law enforcement would be an advantage and said that someone with 38 years of law enforcement experience is only going to have tunnel vision. Kyle would also like to change hiring requirements for employees. He would like to see more local officers. He feels this would also help the department compete with the oil and gas industry for employees and he said that once the age restrictions are opened up it will not be a problem. His current community involvement consists of his kids' activities due to his heavy workload.

Layne Johnson is running for Richland County Attorney. He was asked about changes he would like to see in the office and he mentioned the statistics of how many people convicted of drug-related offenses were incarcerated or given a plea deal. He said the people who are convicted of doing drugs need to be handed over to the Department of Corrections and kept off the streets for a time because we have very few resources here to help them with their addiction but the Department of Corrections has several programs to help them. Those that are dealing drugs need to go to prison. He was asked if elected how he wanted to make a difference and Johnson said this drug issue was how he desired to affect the county.

Charity McLarty is also running for Richland County Attorney. When she was asked what she wanted to change in the county attorney's office she said that morale needs to change and that everyone needs to feel supported and valued. Another attendee asked what the county attorney's office is doing to put pressure on the Sidney Health Center and Richland County Health Department to bring more Sexual Assault Nurse Examiners to the area? McLarty said that she and Janet Christoffersen, the current county attorney, sat down with the hospital about it but now the person who was responsible for that is gone so things may change but more talks need to happen. Until then, Dr. Trevino's office has made themselves available to take care of the job in the meantime. When asked if she would stay if not elected, McLarty said there is a lot of tension in the office right now so she cannot promise but if she was not elected she wanted to stay in Richland County and work for the county attorney's office.

Brian Holst is running for his first term as county commissioner. He mentioned that he wants to run the county like a business and wants more transparency among the commissioners. When asked what specifically he wanted to change he said the first thing he would change is to stop spending money on the fairgrounds. Holst said he had been asked what he thought of there being a union for the county workers and he said he is against it. He was asked to clarify a comment he had made at an event he spoke at that he did not need this job. It was mentioned that when Trump went into office he gave up his salary to be put back into the general fund and that the county is low on funds. Holst said that he would probably donate more money. When asked about whether he would stick around Richland County if elected or not elected, Holst said he loves this area and would like to be here instead of running to Helena all the time.

Shane Gorder is running for reelection as county commissioner. He has held the position since 2011. He was asked about the 121 Ballot Initiative and Gorder said, "Don't sign it.". He said there are too many moving parts to say what it is doing right now and the true meaning of it will not come out until it is passed. He also said, "We can fix our property taxes or we can look at other avenues but this one is not the one. It didn't work in California and they're trying to push it here." Gorder was also asked how we could bring back tourism to the area from the executive level. He said he has been bidding for conferences to come to the area. He also said that when the local hotels asked for a tax abatement he was for it and he sees the Richland County Fairgrounds hosting an Eastern Montana Fair where the 4-H members in Plentywood, Culbertson, and all the other little towns can come show their animals.

Marty Casey is running for reelection as public administrator. Casey explained that a public administrator provides an innocent third-party signature for estates. Usually, the estates he deals with have no will and no heirs. He elaborated that the county attorney decides where everything from the estate goes, he just verifies and signs it. Casey has been doing this since 2010. There is no compensation but he says even though he enjoys doing most of the work, he dislikes doing the estates from suicides, but it is still a great way to give back to the community.