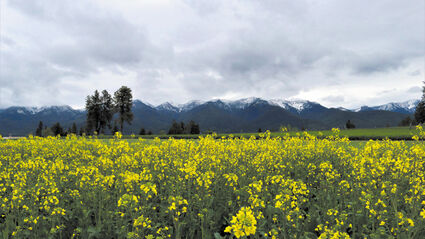 While spring canola is one of the more popular crops in Montana – 185,000 acres were planted in 2021, according to the U.S. Department of Agriculture – the winter variety has very few acres planted. However, winter canola has a higher yield than spring canola and can lead to a more lucrative harvest for growers.

Bozeman - A Montana State University researcher is looking into the benefits of planting an uncommon variety of a common crop, winter canola.

While spring canola is one of the more popular crops in Montana – 185,000 acres were planted in 2021, according to the U.S. Department of Agriculture – the winter variety has very few acres planted. However, winter canola has a higher yield than spring canola and can lead to a more lucrative harvest for growers.

Clint Beiermann, Northwestern Agricultural Research Center assistant professor of agronomy in Kalispell, is currently researching the crop to see how it can be adapted for successful planting in the Flathead region and beyond. The research center is part of the Montana Agricultural Experiment Station in MSU's College of Agriculture.

"We are really excited about winter canola because it yields higher generally in most environments and gives producers who are already growing spring canola another option for a crop they already know well," Beiermann said.

Winter canola is not typically grown in northern states due to the long, cold winters. States like Kansas and Oklahoma focus on winter canola because they have shorter, milder winters and their summers are warm. Spring-planted canola flowers mostly in July and is harvested around late September. Winter canola is planted in the late summer or early fall, has some vegetative growth development, goes dormant in the winter and flowers earlier in the spring.

One issue with winter canola is making sure it can survive the winter. To adapt the crop for Montana, Beiermann is looking at two potential factors: planting date and fertilizer.

"We've seen so far that planting dates make a big difference in the winter survivability because that's going to affect how much time it has in the fall to germinate and grow," Beiermann said. "In those earlier planted times, those canola plants are going to reach a larger stage before they go dormant in the fall. So far in our one-year study, we've seen better survivability from those earlier planted times."

Beiermann's research is also being funded by the Montana Fertilizer Advisory Committee, which allows Beiermann to expand his winter canola research to four sites across Montana, in the Flathead valley, central Montana, southcentral Montana and western Montana. Through the other sites, Beiermann can test the survivability of the plant in a state that has vastly different climates. Beiermann will try different fertilizer rates, coupled with planting dates, to also test how those two variables can factor in the vitality of the plant.

"I think the fertilizer is going to be a key to (its success rate). That along with seeing how different planting dates across four different sites in Montana will affect our outcomes," he said. "I think we are going to see some really interesting results on this trial."

"The work being done by Clint and his team and the rest of our researchers across the state is pivotal to aiding Montana growers and producers looking for new and smart ways to run their businesses," said Darrin Boss, head of the Department of Research Centers and assistant research professor of animal science.

Beiermann visualizes a strong future for winter canola adoption in the state, but there are some potential setbacks. 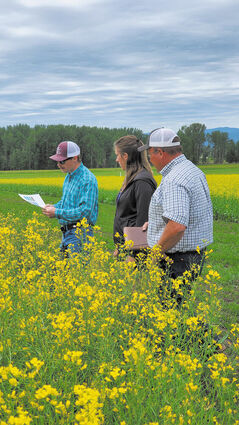 Clint Beiermann, left, is currently researching winter canola to see how it can be adapted for successful planting in the Flathead region and beyond. The crop has a higher yield than spring canola and can lead to a more lucrative harvest for growers. (Photos courtesy of Clint Beiermann)

For one, there is a limit to how early a grower can plant a crop without interfering with another crop grown before winter. In some regions of the state, where winters are colder, harsher and longer, potential planting dates could be as early as August, which makes winter canola's adoption difficult to add into an existing cropping system.

While this may cause some issues for some growers, Beiermann said there are some regions he believes the adoption of winter canola can be successful.

"Fitting winter canola into your system if you have a fallow field in a given year is an option," Beiermann said. "The encouraging part is a lot of Montana is in small grains production that has a fallow period in their cropping system. The Flathead is not a region where there is a fallow cropping season because we have so much rainfall, but drier regions that have fallow periods to accumulate moisture would be best. I am excited for the potential there and that they could achieve a planning date by planting during a fallow season."